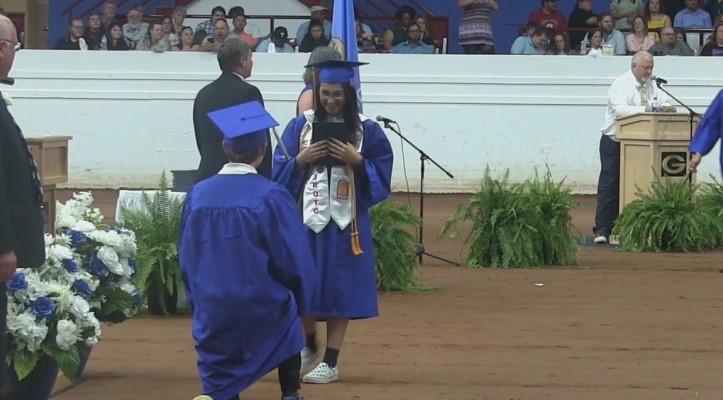 Guthrie’s superintendent only assumed he was about to take a selfie with a graduating member of the Class of 2021. Turns out, he was about to watch his first high school graduation wedding proposal.

Nearly 170 students received their diplomas last week during Guthrie High School’s commencement at the Lazy E Arena, but only one student received an engagement ring.

Moments after Adam Fields name was heard over the sound system, he walked over seemingly with a purpose to accept his diploma and pose for a photo. He soon made his way to Superintendent Dr. Mike Simpson, shook his hand, paused and began digging into his pants pocket.

In the meantime, Emily Thurman’s name was introduced as she waved to the stands and accepted her diploma. All the while, Fields was watching and nervously waiting to make her way over to the superintendent.

As she did, Fields got down on one knee and made his proposal.

After pausing in shock, she accepted, stared at her new ring and shook the superintendent’s hand.

“I doubt she even remembers my handshake,” a humorous Simpson said.

Following another round of pictures with their diploma (and engagement ring), the high school principals were the first to offer their congratulations to the engaged couple.

We wish the couple the very best.

Be the first to comment on "Watch: Marriage proposal accepted at Guthrie High School graduation"