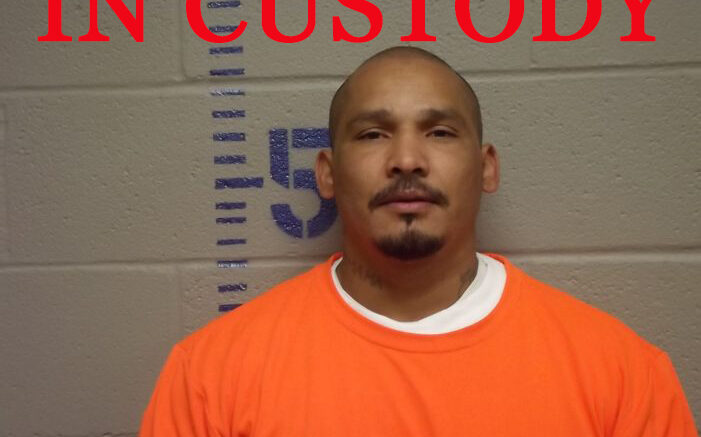 On Thursday afternoon, a woman was shot and Adam Quilimaco was apprehended behind a convenience store in Allen, Oklahoma.

Pontotoc County Sheriff John Christian told the Ada newspaper that a Fugitive Task Force member encountered Quilimaco when they went to investigate the reported use of a credit card at the store.

Quilimaco escaped custody from the Logan County Sheriff’s Office as he worked as a trustee.

“(Quilimaco) and his girlfriend were parked behind the store upon his arrival,” Christian told the paper. “She went for a gun and the Task Force member shot her multiple times.”

Logan County Sheriff Damon Devereaux was unable to tell Guthrie News Page for certain the identity of the woman that was shot.

Mercy EMS officials confirmed the individual was flown by AirEvac Lifeteam 26 to an Oklahoma City.

How Quilimaco was able to escape

Guthrie News Page is learning more how Logan County Jail inmate Adam Misty Quilimaco was able to escape custody on Wednesday afternoon while working on a work crew as a trustee.

Sheriff deputies learned that Quilimaco was working at the District 1 barn, along with another trustee inmate, and returned just after 4 p.m. The man responsible for Quilimaco says he left him unattended at around 4:15 p.m.

Multiple people told deputies they had recognized a black or dark color Jeep in the parking lot of the barn with a female inside.

The female reportedly showed a revolver to employees and asked how to load the gun. All parties were able to identify the woman as Melissa Grayson.

Another reporting party stated Quilimaco was upset about being offered a life sentence for his crimes and made the decision to escape. The plan was for Grayson to pick Quilimaco up from the barn and travel south.

A local car dealership informed deputies that Grayson, the day before the escape, stole a 2004 Jeep Grand Cherokee after taking it out for a test drive but never returning the vehicle.

Phone records from inside the jail between Quilimaco and Grayson revealed their plot. At one time, Quilimaco states “still on tomorrow” in which Grayson replied “yeah.”

Another phone call between the two they discuss they are each other’s “ride or die” and that they were about to be “gone.” They also discussed the movie Natural Born Killers where the actors “go around killing a bunch of people, him and his girlfriend.”

During the attempt of locating Quilimaco, his jail clothing consisting of a Logan County Inmate grey t-shirt and orange jail pants were found in the area of Liberty Lake.

Online records show several guilty convictions for Quilimaco, including rape in the second degree in Kay County. Along with the 2001 rape conviction, Quilimaco was found guilty in 2005 for failing to register as a sex offender in Logan County.

In addition to the rape and failure to register crimes, Quilimaco has been found guilty in three burglary cases, three stolen property cases, two robbery cases and unauthorized use of a vehicle. All those crimes took place in Kay or Logan County from 1998 to 2005.

Quilimaco has cases pending in Logan County, including robbery by two or more persons with a weapon, possession of a controlled dangerous substance in jail, escape from jail and conspiracy to commit a felony.