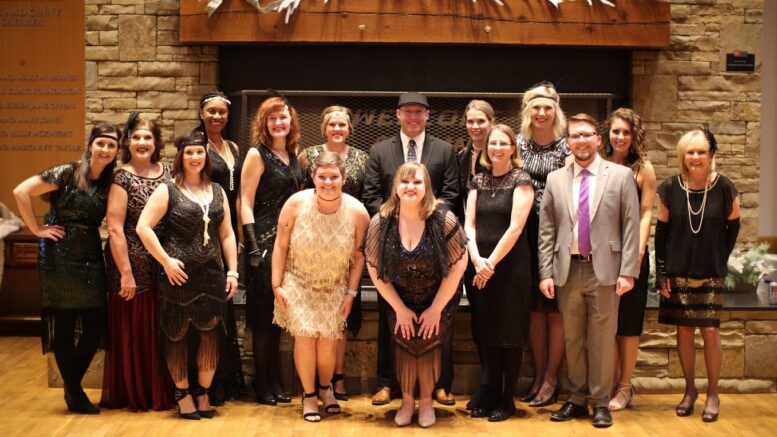 Stillwater, OK— Maybe you spotted them on Saturday, February 1. Attendees at CASA for Kids’ yearly fundraiser were all decked out in 1920s attire and ready for a good time at the OSU Alumni Center. CASA for Kids fundraisers have a reputation for costumes and fun and this year was no different with a 1920s theme. The event was a sellout with over 300 attendees.

The event was successful on several levels. In addition to a good time, attendees learned more about the mission of CASA and how it impacts children in the court system. The evening’s program featured moving testimonials from two people greatly impacted by the work of CASA. The first was Nicole Spradling who spoke of her experience as a child in the court system and the positive affects her CASA worker had on her experiences. The second speaker was Judge Louis Duel who spoke from the point of view as a judge presiding over the decisions made in family court. He expressed gratitude for CASAs’ points of view and their help in making these very difficult decisions.

Another level on which the event was a success was in funds raised – over $125,000! The generosity of sponsors such as Platinum Sponsor Renaissance and Interworks, who matched donations from attendees, helped insure the success. After a delicious meal provided by Meditations, attendees participated in auctions and bid on items which included safari trips and a trip to Ireland. Games of chance such as “Last Man Standing” and “Head or Tails” kept everyone on their toes. With the help of auctioneer Jimmie Dean Coffey, few people went home empty-handed.

“This was my first fundraiser as director of CASA and I was amazed at the number of sponsors and individuals that helped to make it a success,” said Kristy Kitsman, Executive Director. “We changed venues to the OSU Alumni Center and were relieved that things went so smoothly.”

CASA for Kids is a local non-profit organization that recruits, screens, trains, and supports volunteers who advocate for the best interests of abused and neglected children in juvenile deprived court cases. If you would like to learn more about becoming a volunteer to represent these children in court, contact CASA for Kids at 405-624-2242.