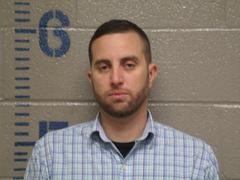 Updated on Jan. 21, 2022 — Guthrie News Page reached out to Guthrie Public Schools in regards to the arrest of Christopher Andrews. The school distrcit released the following statement:

On Friday, December 3, 2021, a Guthrie Public Schools administrator received a report from a member of the community that a local law enforcement officer who was providing security on a temporary basis for Guthrie High School was engaged in an improper relationship with high school student. The matter was immediately referred to the Guthrie Police Department and the Logan County Sheriff’s Office. The officer was also immediately removed from future consideration of any assignments at Guthrie Public Schools.

The law enforcement officer, former Deputy Chris Andrews of the Logan County Sheriff’s Office, worked off duty on a contract basis during the day at Guthrie High School. The deputy worked a total of nine days during the months of September and October and also served on an off duty, evening security detail with other officers for
two high school home football games.

The district has cooperated fully with all investigating agencies including the Guthrie Police Department, Logan County Sheriff’s Office and the Oklahoma State Bureau of Investigation.

Guthrie Public Schools routinely contracts with individual off duty law enforcement officers to provide security at school sites which may not have a school resource officer assigned to their building.

Updated on Jan. 21, 2022 — A former Logan County deputy is facing a felony charge after the Oklahoma State Bureau of Investigation (OSBI) investigated allegations the deputy had an inappropriate relationship with a minor.

The Logan County Sheriff’s Office requested OSBI assistance on December 3, 2021 after learning that former Deputy Christopher Andrews, 33, was having a relationship with a 17-year-old high school student that was sexual in nature.

Based on the investigation by the OSBI, Andrews was charged with one felony count of Engaging in Sexual Communication with a Minor by Use of Technology.

A warrant for Andrews’ arrest was issued yesterday and he turned himself in this morning. His bail was set at $50,000, which he posted and was bonded out.

An arrest warrant was filed Thursday against a former Logan County Sheriff’s Office deputy, who at times served as a school resource officer.

The District Attorney’s Office has charged Christopher Andrews with engaging in sexual communication with a minor by use of technology.

Court papers alleged Andrews engaged in communication for sexual or prurient interest by the use of text messages with a 17-year-old. The affidavit reports that Andrews explicitly discuss potential sexual acts.

The messages are said to have taken place between last June 2021 and September 2021.

If found guilty, Andrews could face no more than 10 years in prison, up to $10,000 or both punishments.

Guthrie News Page has learned Andrews was a Logan County deputy when a third party came forward with credible information on December 3rd.

Andrews, who started working in the jail before becoming a deputy, was suspended and terminated following a LCSO internal investigation on the same day (Dec. 3).

The Sheriff’s Office immediately contacted the Oklahoma State Bureau of Investigations for a criminal investigation.

At the time of his termination, Andrews had served as a temporary school resource officer at Guthrie High School.

Andrews is expected to turn himself into the Logan County Jail on Friday and be formally arraigned on the felony charge.

Guthrie News Page will have more information as it becomes available.