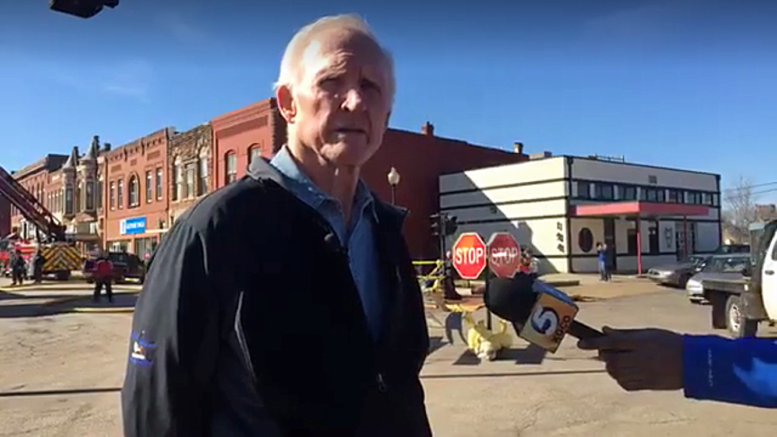 Byron Berline has had enormous amount of publicity over his storied career, but on Sunday he said, “This is not the publicity I want.” Berline made the comment near his destroyed shop.

“Sadness. Shock. This is my livelihood,” were the words Berline shared about seeing his musical paradise and the rich history loss inside the downtown building he bought in 1994.

On Saturday, Berline’s business and shop (Double Stop Fiddle Shop) along with Furrow Flowers & Gifts were destroyed after a large fire broke out from behind the flower shop. Related article: Flames destroy historic downtown buildings

“Luckily, no one was killed or injured in the fire,” Berline said.

Berline, who is known around the world as one of the top fiddle players, was on a golf course in Mexico on an annual vacation when he received the dreadful text.

“What,” Berline said when he received the message.

Next, came the photos and videos.

Berline caught a flight shortly after and arrived to Guthrie early Sunday morning.

The fiddle star says it has been “amazing” who has reached out to him with messages and sentiments following the fire, including members from the popular music group Eagles, along with people in Nashville, Europe, Italy and Germany.

“They are devastated as much as I am. They tear up because they are affected also,” Berline said as his voice became weak with sorrow.

Inside the fiddle shop was over 400 violins, 80 guitars, history of playing music (pictures and recording tapes) and memorabilia, including items from Elvis Presley, Rolling Stones and a violin that Arnold Schwarzenegger played.

Berline is grateful that one piece of his valued equipment made it out of the inferno.

“My son-in-law grabbed my main fiddle that I play before he went out the last time.”

“I’m going to keep playing music. That’s what I love to do. Whether I opened up another place, I don’t know yet.”