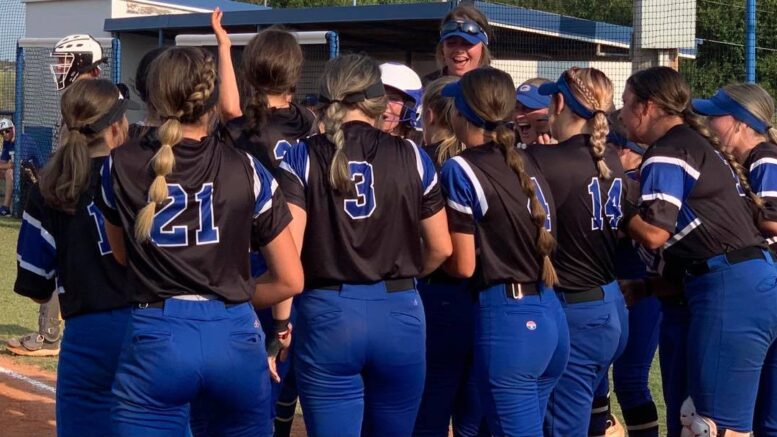 In a classic Class 5A versus Class 4A match-up, Guthrie needed all seven innings to prevail over Perkins-Tryon, 10-9, on Tuesday evening.

Junior Ashlee Eichler delivered a three-run double to send the Jays into the winner’s circle.

The win secured Guthrie’s fourth straight win and improves to 19-7 overall. Perkins (25-5), who year in and year out is among the best in the state, saw their five game winning streak come to an end.

Guthrie saw their four-run lead disappear in the fifth inning as Perkins plated four runs to tie the game at 6-all.

Perkins scored two more runs in the sixth inning to take an 8-6 lead and then a 9-6 lead with a run in the top of the seventh.

Down to their final three outs, Guthrie did not hit the panic button.

Freshmen Haley Gallo led the inning off with a blast over the left field fence for her 12th home run of the season to pull the deficit within two runs, 9-7.

Next, senior Eadie Jobe singled and was followed up with hits by senior Jules Leach and sophomore Abbie Eichler to load the bases for Ashlee Eichler’s game winning hit.

On Saturday, Guthrie concluded their district schedule with a home sweep of Bishop McGuinness with 10-0 and 12-2 wins.

The Lady Jays finished second in the district with a 12-2 record with the only blemishes coming from Piedmont with 4-3 losses in both games. Both teams will host regionals next week.

Guthrie will play Southeast in the first game of the double-elimination regional.

The regional winner will advance to the Class 5A state tournament at Hall of Stadium on Oct. 14.

Be the first to comment on "Eichler delivers walk-off win; Lady Jays to host regionals"