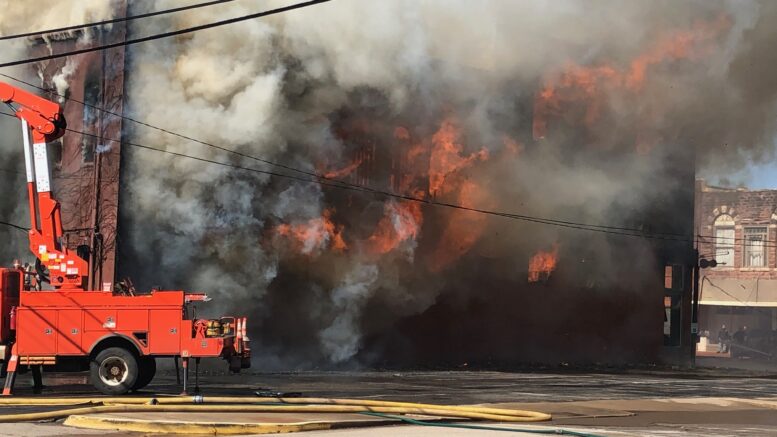 The owner of Furrow Flowers & Gifts is denying several allegations in a 2019 lawsuit brought on by Byron and Bette Berline. The lawsuit was filed after two downtown buildings and majority of the contents inside were destroyed by fire.

The fire broke out on Feb. 23, 2019 and quickly moved throughout two buildings (Double Stop Fiddle Shop and Furrow Flowers & Gifts), which were both owned by the Berline’s at the time of the fire. Related article: Flames destroy historic downtown buildings

The Berline’s filed the lawsuit — by their attorney Tim Green — in the District Court of Logan County on Dec. 26, 2019 against Jeffery Scott VanMaanen, Debra N. Corey and Furrow Flowers & Gifts, LLC.

In April, Corey, owner of the flower shop, through her attorney — Brently C. Olsson —responded to the court documented allegations.

According to the lawsuit, VanMaanen, a sibling of Corey, was “observed multiple times coming out onto the back of the porch of the (flower shop) building and smoking cigarettes and then throwing his cigarette butts onto the ground.” The allegation goes on to say the conduct was done with authorization by Corey and the business.

The Berline’s claim VanMaanen was again observed smoking on the back porch of the flower shop days before the fire broke out. At that time he had been specifically told to stop doing that because there was a danger he was going to start a fire, the lawsuit claims.

On the date of the fire, VanMaanen reportedly went to the back porch, smoked a cigarette, threw his lit cigarette butt down on or near cardboard materials, which resulted in the fire.

In response, Corey’s court response was “insufficient information to admit or deny the allegations.”

Raw video posted to Guthrie News Page’s Facebook page shows the early stages of the fire coming from the back of the buildings as firefighters attempted to extinguish the flames.

In addition to the loss of buildings, instruments and personal belongings, the Berline’s claim they lost in excess of $12,000 in profits with concerts and $14,000 in business of buying, selling and trading musical instruments. Related article: Byron Berline: “What am I going to do next?”

While an exact dollar amount of restitution was not identified, the Berline’s are asking for an amount of their compensatory damages, or as large as a jury deems appropriate, plus interest, to go along with court and attorney costs.

In response, Corey’s attorney states VanMaanen was not an employee of the flower business, was not under the control of Corey and says his client and her business is an improper party of the lawsuit.

A court documented response on behalf of VanMaanen has not been filed with the court, according to online records.

A court hearing date has not been listed at the time of this article.