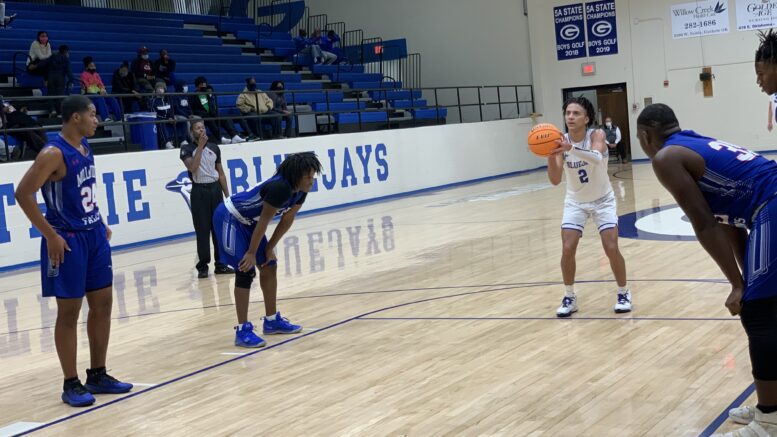 Guthrie guard TJ Kelly shoots a free throw in a game against Millwood.

Both the Guthrie High School boys and girls basketball teams will be on the road for when regional play begins later this month.

Of the 16 seeds on the west, Guthrie enters as the 6 seed taking on 11 seed Noble.

The two winners will advance to the regional championship on Feb. 27 at 1:30 p.m.

The Lady Jays have not played a game in the month of February due to COVID restrictions.

With an 8-8 season so far, Guthrie is set scheduled to end the season with games against Carl Albert, Piedmont and Shawnee.

For the Bluejays, the drought of games exceeds the Lady Jays with their last game being played on Jan. 19.

In a scheduled Jan. 21 game in the Kingfisher Tournament, as the Jays approached center court to begin the game, they were called off due to a player from a previous team attracted the COVID virus.

With a 4-6 record, Guthrie is scheduled to play Piedmont and Shawnee to conclude the season.

The two winners will advanced for a 7 p.m. regional championship on Feb. 27.

Be the first to comment on "GHS Basketball receives regional assignments"