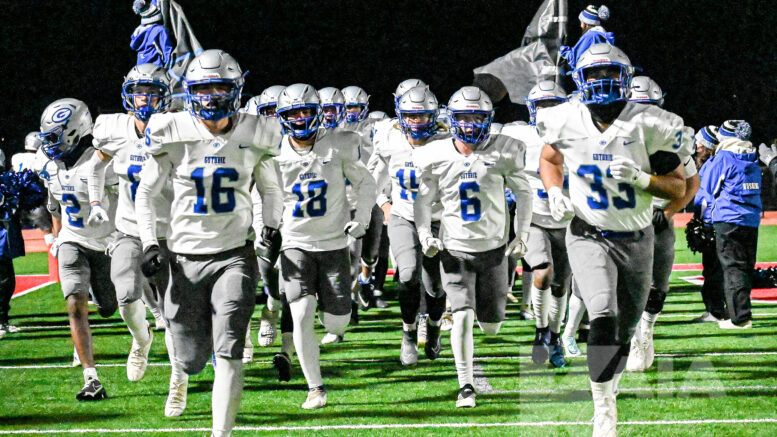 The Guthrie Bluejays run out onto the field in Elgin for the first round of the Class 5A playoffs. Photo courtesy of Kaia Calvert. For photos visit https://kaiacalvert.smugmug.com/

For decades, District 5A-2 has been one of the toughest football districts in Oklahoma high school football. The coaches recognized Guthrie with 11 players selected with All-District recognition for the 2022 season.

This past season, 5A-2 saw all four playoff teams win their first-round games, and Carl Albert won their 17th state championship.

Tashawn James of Carl Albert was named the District’s Overall Player of the Year.

Reed Dequasie of Carl Albert was named the District’s Offensive Player of the Year.

Guthrie’s Landon Hirzel and McGuinness’ Kelle Fraile were named Co-Defensive Players of the Year. Hirzel was a three-year starter for the Bluejays and made an impact in 2022 at linebacker after moving from the defensive line.

Vincent Shivers, of McGuinness, and Caleb Cornell, of Carl Albert, were named Co-Defensive Lineman of the Year.

The Special Teams Player of the Year was awarded to Guthrie’s Jaylen Chelf.

The Ironman Player of the Year went to Guthrie’s Jackson Walters.