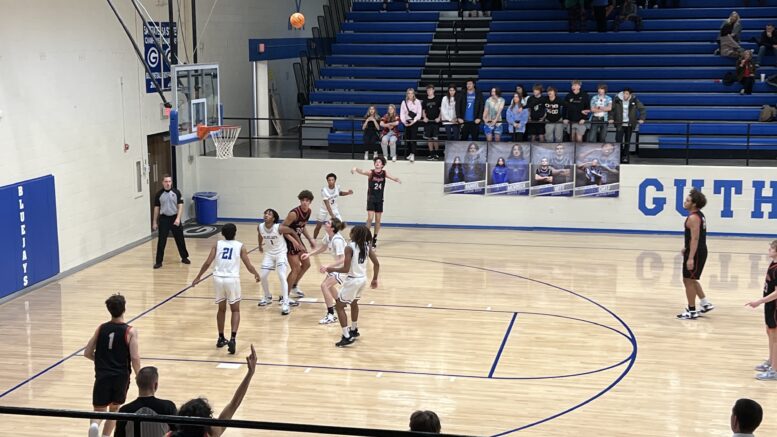 The Guthrie Bluejays rallied in the fourth quarter to nearly draw overtime against Class 4A’s Crossings Christian in a game played within 24 hours of being scheduled.

The Jays outscored Crossings 22-13 in the final quarter inside the GHS gymnasium as the Jays’ three-pointer came up short as the horn sounded. Crossings escaped with a 58-55 entertaining win early Friday evening.

Guthrie falls to 2-4 in the young season.

Crossings Christian is a Class 3A program bumped up to Class 4A due to high success in post-season play, including a 2021 state championship and several other deep runs in recent state tournaments.

Both teams needed an extra game just before the holiday break and were scheduled late Thursday. The game was scheduled at 4 p.m. to allow a game official time to make his regular scheduled games in Millwood.

Guthrie had multiple chances early in the fourth to draw closer but was unable to get shots to fall. However, they did late in the quarter.

Guthrie finished the game on a 13-4 run with huge buckets and pressured defense.

After Crossings missed two free throws with 15 seconds left, Senior Jaylen Chelf drilled a 3-pointer with 5.5 seconds to make it a one-point game, 56-55.

Following a foul, Crossings nailed two free throws for a three-point lead. The Jays were able to break the full-court pressure and found an open three-point shot by Morgan but the shot rimmed out for Crossings to escape.

Despite the loss, Guthrie competed well and nearly took down the undefeated Knights (7-0).

Chelf lead the way for Guthrie in scoring with 18 points and was closely followed by Morgan’s 16 points. Junior Jaylen Morgan gave the Jays seven points off the bench.

The 16-ranked Bluejays will next be in action on January 5 when they begin the Weatherford Tournament.

Up next for the program will be the annual Alumni Game on Thursday, December 22. The game will be played at the high school beginning at 6:30 p.m. The cost to play and attend is $10 which will benefit the basketball program.