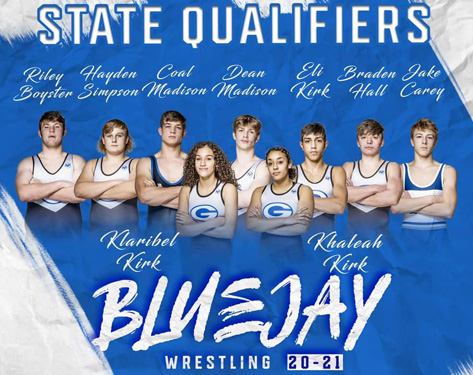 With Dual State coming in March for the Guthrie High School wrestling program, the Jays will send 9 wrestlers to the Wrestling State Championships this week in Oklahoma City.

Following a fourth place finish in Duncan at the 5A West Regional that wrapped up on Monday, the Jays will send seven boys to Friday’s championships to go along with two girls to the first ever girl’s wrestling state tournament. Related article: Kirk sisters qualify for first ever girl’s state wrestling tournament

At the Duncan regional on Saturday, Eli Kirk (113 pounds), Braden Hall (126 pounds), Jake Carey (138 pounds) and Dean Madison (145 pounds) each finished as regional runner-ups. They will each be the two seed at state.

Coal Madison won the regional and will be one of the top two seeds in the 195 pound field.

Tyler Gettings placed 6th and will be considered an alternate.

The state championships will now be a one day event for the boys and girls due to COVID restrictions.

The girls state tournament on Thursday begins at 10:30 a.m. inside the Jim Norick Arena in Oklahoma City. The medal matches will begin at 6:30 p.m.