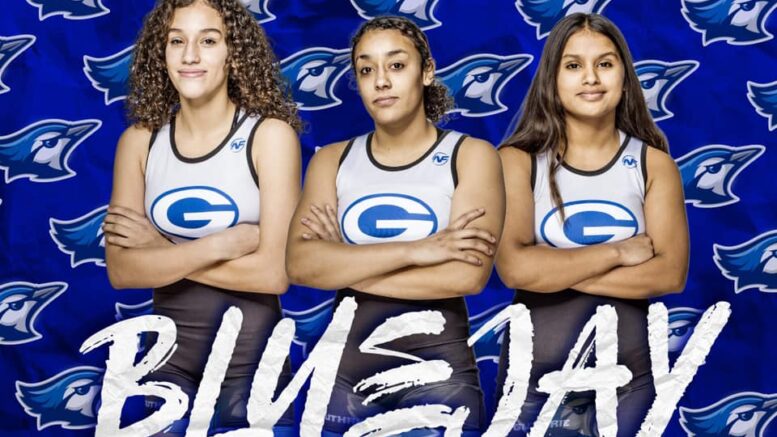 Pictured (L-R) is Klaribel Kirk, Khaleah Kirk and Cheli Hernadez participated in the 5A West Regional on Monday in Norman.

The Kirk sisters, Khaleah and Klaribel, of Guthrie High School will be a part of history after they qualified on Monday for the first ever sanctioned Oklahoma high school girls state wrestling tournament.

Khaleah, Guthrie’s first female wrestler, will be known as one of the first regional champion after claiming the top place on the Class 5A West Regional bracket on Monday.

The younger sister, Klaribel, also punched her ticket to the state tournament with a third place finish.

The regional, held at Norman High School, saw Khaleah dominate all three of her opponents in the 118 pound class with all wins coming by falls. She secured the falls in 49, 22 and 180 seconds.

The sophomore will enter the state tournament with an impressive 19-0 record.

After last year’s state wrestling tournament, the OSSAA board of directors voted to officially sanction girls wrestling beginning in 2020-21.

Klaribel, a freshmen, finished the regional with a 3-1 record to secure the third place finish in the 100 pound weight class. After opening the regional with a fall in 1:43, she dropped her second match, 15-2, forcing her to win the next two matches to place.

She finished the regional strong by pinning her Noble and Anadarko opponents to earn the trip to the Big House.

Klaribel will enter the state tournament with a 15-5 record.

In a deep field in the 107 pound weight class, freshmen Cheli Hernadez started off on the right path with a pin (2:36), but dropped her next match by fall.

Hernadez was able to regroup for a win by fall in her third match, but dropped her next match to be eliminated from the regional and finished the year with a 9-9 record.

The Kirk sisters will participate in the state tournament on Feb. 25 at the State Fairgrounds Arena in Oklahoma City.