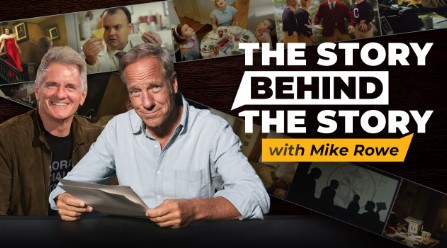 Mike Rowe, best known for his work on the television show Dirty Jobs, will film part of the third season of his T.V. Show, “The Story Behind the Story,” in Guthrie next week.

Rowe is scheduled to film in Bartlesville on Friday before coming to Guthrie and Kingfisher next week.

“This season has 13 episodes that span the course of 100+ years. In each episode, we bring to life extraordinary true stories of genuine American heroes. We cover all types of people. Everyone from the Founding Fathers to Rock and Roll Icons to Martin Luther King Jr,” Jonathon Coussens, Oklahoma native and director of the series, says.

Rowe tells true stories you don’t know, about some famous people you probably do. From code breakers to Hollywood bombshells, unlikely inventors to naked bank robbers, Mike sits down with TBN President Matt Crouch to reveal the story behind the story… and perhaps a moral or two.

Along with telling these stories, the show also boasts over 500 cast and crew, a stable of horses, and a few dogs, marking itself as one of the larger productions to film in Oklahoma.

“It’s because we have a talented local crew base,” says Coussens. “For a long time the coasts have discounted the middle of the country, but not anymore. We are consistently proving Oklahoma and Oklahomans know how to make feature and episodic content. I’m especially proud to be working in my home state on a show like this. “The Story Behind the Story” and the podcast “The Way I Heard It” are types of entertainment Americans want to see made. Entertainment that is inspirational, real and worth watching.”