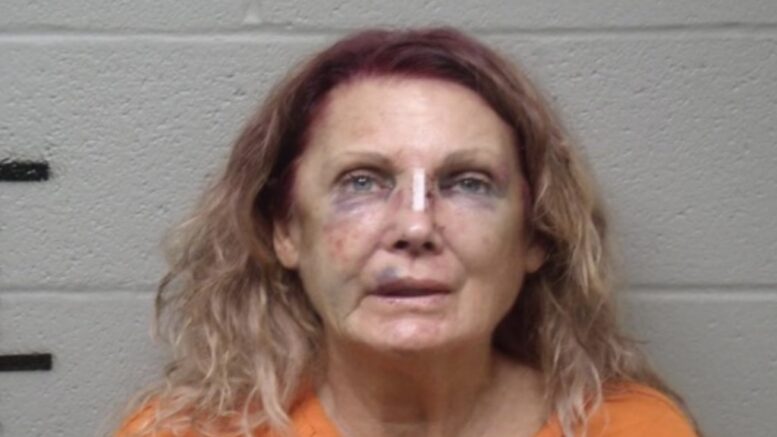 Police video may shed some light on exactly what happened in the early morning hours when a Guthrie woman was pulled over by an Oklahoma Highway Patrol trooper. The woman was arrested on multiple counts but left with several injuries to her face and arms.

The trooper pulled 68-year-old Nancy Kemp’s vehicle over on Interstate 35 near Seward Road at 12:29 a.m. on May 11. The trooper stated a vehicle was observed driving with their high beams on and within one car length of another vehicle, according to police report obtained by Guthrie News Page.

Kemp, who has not been formally charged with any crime at this time, was asked to sit in the trooper’s passenger seat and that is when the trooper said an odor of alcohol was coming from Kemp, who reportedly told the trooper she was coming back from a Oklahoma City bar. The trooper said Kemp revealed she had “drank one mixed drink and identified the drink as Tequila.” The trooper added, “I noticed her to have red and watery blood shot eyes and slurred speech.”

The trooper prepared to conduct a field sobriety test and that is when Kemp aggressively opened the door and slammed her left hand on a computer in attempt to take her license before fleeing from the patrol unit, according to the trooper.

“I grabbed the back of Kemps neck with my right hand in attempt to prevent her from fleeing,” the trooper said. “Kemp continued to pull and thrust her body weight in attempt to flee the scene.”

The trooper removed Kemp from the vehicle by rolling out of the passenger side door before landing on the ground and ordered Kemp “multiple times” to place her hands behind her back. However, she refused, the trooper stated.

Next, the trooper continued to use force to gain control of Kemp.

“In order to gain compliance, I struck Kemp in the face two times with my right knee,” the trooper said in the report. “I continued to order Kemp to give me her hands and Kemp continued to actively resist by not placing her hands behind her back. I struck Kemp in the face with my right elbow one time. I was able to gain compliance and handcuffs on Kemp.”

However, Kemp allegedly was able to slip her handcuffs and off her wrists before the trooper, once again, gained control.

The trooper continued, “I gained control of Kemp and placed her into a back mount for a second time. Kemp continued to resist me and attempted to grab something under her. I successfully prevented Kemp from grabbing the object by striking her an additional two times with my right knee to the face. I gained compliance and successfully placed cuffs on Kemps wrist for a second time.”

Kemp was ultimately booked into the Logan County Jail at 4:08 a.m. for assault and battery on police officer, resisting, driving under the influence of alcohol, obstruction, and improper use of multiple-beam road lighting equipment.

Kemp’s arraignment in Logan County was postponed on Friday. She’s scheduled to be back in court June 27th.

Family and friends of Kemp shared a different story on exactly what happened that early morning. Although, at this time, not as detailed as the trooper’s report.

“Ultimately, he got angry with her for texting (she was alone, scared, and texting her daughter) and ended up breaking ribs 2-8 on her left side, breaking her nose, and bruising her all over her body,” Kemp’s granddaughter Kylar Kekutia said on a GoFundMe account.

“My grandmother has a long road of healing, surgeries and mounting medical and legal bills to obtain justice for the injuries she received at the hands of the trooper.

A video was posted to TikTok showing the injuries Kemp sustained during the incident.

“Without knowing OHP’s official position, I would note that law enforcement officers are trained in, among other things, de-escalation and proper restraint techniques. Most of Oklahoma’s law enforcement officers do these things – and their jobs – well every day. Trooper Preston Cox, however, broke ribs 2-8 on Ms. Kemp’s left side, broke her nose with repeated blows to the face, stomped on her left foot, and left significant bruising all over her face and head, upper and lower arms, and upper body – and inflicted most of these injuries while Ms. Kemp was restrained with her hands behind her back secured in handcuffs.

Any attempted justification of the brutal assault of a 68-year-old great-grandmother wearing a long skirt and strappy sandals, who has a clean record and had no weapons, simply defies explanation. To the extent that she is being accused of fighting back, any struggle was in defense of her life – and frankly, we are all grateful that she made it out alive. We await the Logan County District Attorney’s decisions as to whether to file charges against Ms. Kemp – and as to whether to file charges against Trooper Cox. In the meantime, Ms. Kemp’s medical condition is still being evaluated as the swelling subsides, and the family – and everyone who knows and loves Nancy – is looking forward to seeing justice done.”

OHP confirmed they have body camera video of this incident, but it is not being released right now because it’s part of the ongoing investigation, according to the OKC news station.