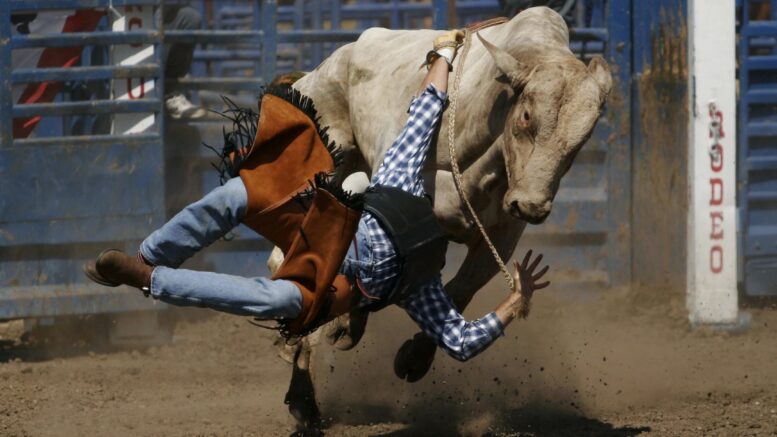 The landmark event will begin on Friday, August 14 at 7:45 p.m. CT with Round 1 of the PBR Unleash The Beast’s revival of the iconic Bullnanza. The event, which traces its history back to 1989, prior to the inception of the PBR, will conclude with Round 2 and the championship round on Saturday, August 15 at 12:45 p.m. CT.

Following PBR’s premier series event, the action-packed weekend will conclude with the WCRA’s one-day, $300,000 Major Rodeo, the Stampede at the E, part of the Triple Crown of Rodeo, on Saturday, Aug. 15 at 7:00 p.m. CT.

In cooperation with local and state government as well as Lazy E Arena, PBR and WCRA have instituted a series of fan safety protocols for a safe and responsible event, including:

The popular event would run for a decade, and during the most recent Bullnanza in 2009, two-time PBR World Champion J.B. Mauney locked in the event championship.

In addition to commemorating this iconic western sports event, the forthcoming PBR Unleash The Best event also builds on more recent history after Lazy E Arena hosted the league’s triumphant return after the live sports and entertainment industry had shut down due to COVID-19 (coronavirus).

At the first event, Fabiano Vieira went a flawless 3-for-3 to win the Las Vegas Invitational, presented by Union Home Mortgage, and crack into the world’s Top 10. The victory was the veteran Brazilian’s first event win since 2018 and made him the fourth oldest rider in league history to capture an elite Unleash The Beast event title.

Jose Vitor Leme then further cemented his world No. 1 lead, winning the Cooper Tires Invitational, presented by Ariat, inside Lazy E Arena, his league-leading fourth premier series event of the season.  The phenom’s perfect performance was punctuated by a monstrous 90-point ride aboard I’m Legit Too, avenging a bitter buckoff from earlier in the season which denied him a $100,000 payday.

At the final closed event held in Logan County, Oklahoma, Lucas Divino rode Chiseled for 90.75 points in the championship round of the Lucas Oil Invitational, presented by U.S. Border Patrol, to take his place atop the Can-Am Cage in winning the event and climb inside the world’s Top 10.

Following the PBR Unleash The Beast event, fans will be captivated by the second WCRA Major rodeo of the 2020 season.

Bull riders competing in the WCRA’s Stampede at the E will compete for a $78,000 purse. The $50,000 champion payout from the Kansas City Royal City Roundup Major carried over after no qualified rides were recorded in the showdown round.

The Stampede at The E will be the second of three Major events comprising the WCRA Triple Crown of Rodeo. The WCRA Triple Crown is a trilogy of Major rodeos offering a $1 million bonus to any one athlete or collection of athletes who win first place in any three consecutive WCRA majors. The first stop of the series was held in Kansas City, Mo. On Feb. 28, with the third leg scheduled for 2021.

The PBR Unleash The Beast’s Bullnanza begins with Round 1 at 7:45 p.m. CT on Friday, August 14, concluding with Round 2 and the championship round at 12:45 p.m. CT on Saturday, August 15. All 35 bull riders will get on one bull each in Round 1 and 2. Following Round 2 on Saturday afternoon, the riders’ individual two-round scores will be totaled with the Top 15 advancing to the championship round for one more out and a chance at the $30,000 event title.

The WCRA’s Stampede at the E begins at 7:00 p.m. CT on Saturday, August 15. All nine athletes will go head-to-head in a long round with the top three best runs and rides advancing to a showdown round following an intermission.

For an enhanced PBR experience, fans can now purchase PBR Elite Seats and Premium Experiences, which provide a behind-the-scenes look into the toughest sport on dirt. For more information on the upgraded experiences, fans can contact PBR Direct at 800-732-1727.

Athletes from around the globe have the opportunity to compete in the WCRA Major Events Series and compete for the TCR after qualifying through the VRQ. Qualifying for the Stampede at the E is currently underway and athletes can continue nominating until July 26.

Since launching in May of 2018, the WCRA and its partners have awarded more than $7,300,000 in new money to rodeo athletes. All rodeo athletes interested in learning more about the WCRA or the VRQ should be directed to wcrarodeo.com.

The PBR Unleash The Beast season consists of more than 20 stops, traveling to cities such as New York, Chicago, Los Angeles and many more. The season will culminate with the PBR World Finals at Las Vegas’ T-Mobile Arena Nov. 4-8, when the 2020 PBR World Champion, the bull rider who earns the most world standings points during the season, will receive the coveted World Championship belt buckle and $1 million bonus.

All scheduled dates for PBR and WCRA events are subject to change based on government guidance and changing health conditions.