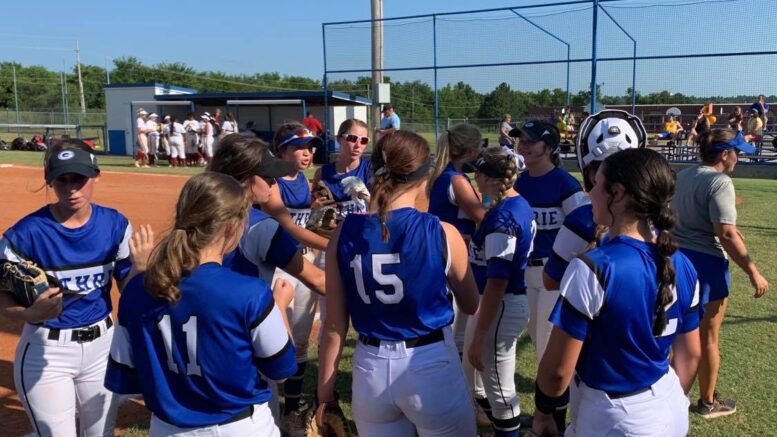 The Guthrie High School softball program had a week to remember last week with five wins, including three district wins. Now, another busy week for the Jays as they will go up against one of the best in Class 5A.

“Girls came together well today and it took a lot of us to get the job done,” head coach Booker Blakley said after the two wins against Guymon.

In between the district games, Guthrie defeated the Oklahoma City Broncos (13-5) and Class 6A Enid (5-3).

It would be a good argument of who had the better week. The Guthrie offense or the Guthrie pitching as the Lady Jays outscored their opponents 56-15.

Freshmen Haley Gallo continues a strong beginning to her high school career. For the week, she finished 10 for 11 at the plate with three round trippers and nine runs batted in.

Jules Leach was 7 for 8 with two doubles and four RBI’s. Elaina Clark was .500 at the dish by going 9 for 18 with a double, a big fly and nine runs driven in. Freshmen Kinley Duehning added to the mix with eight hits in 16 at bats and finished with three doubles, two homeruns and 10 RBI’s.

If that was not enough, Guthrie finished with seven players hitting .400 or better and as a team batted .435.

Inside the circle, the Lady Jays saw great showings between three pitchers as they combined to give up 15 runs in the five games. The staff finished the week with an earned run average of 1.58 as less than half of the runs were unearned.

Junior Ashlee Eichler tossed 14 innings in the week to pick up two victories. She struck out seven and walked three.

This week the Lady Jays will have four more district games, including a home double-header with Capitol Hill on Monday (5 p.m.).

On Tuesday, the Jays will host Piedmont (5:30 p.m.), who is 14-1 overall and 6-0 in the district. The Wildcats more times than not find themselves in the state tournament field and will again be one of the favorites to get there. The game will more than likely help decide the 5A-2 district title.

Guthrie ends the week with a trip to El Reno with a 5 p.m. first pitch on Thursday.

Below is the updated district standings as of August 30, 2021. The top two teams to finish will host regionals.

Be the first to comment on "Softball has perfect week with five wins; Piedmont on the horizon"