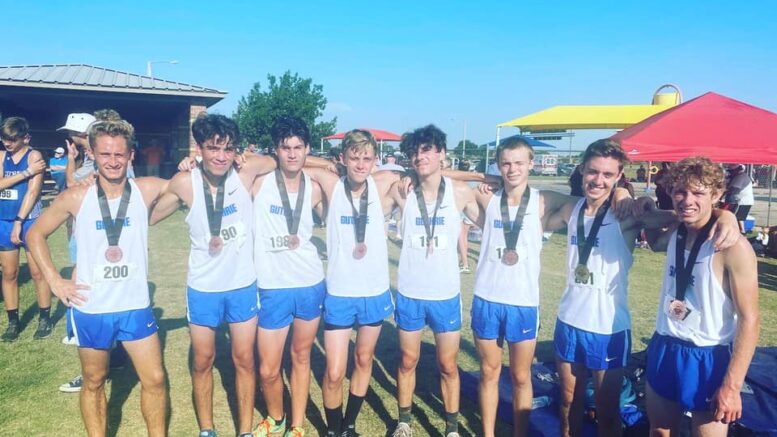 The Guthrie High School cross country season started with a team win for the Jays in Weatherford.

The Guthrie boys cross country season started off with a team win and an individual win with Lance Sallee in Weatherford. They followed that up with an unusual race under the lights.

The Bluejays finished with three runners in the top five and six in the top 15 to easily capture the overall team win with a low score of 27 points. Elk City was next with 74.

For the Lady Jays, they claimed second place in the mile and a half race with 61 team points. Kingfisher took the team title with 29 overall points.

Over the weekend, the varsity and junior varsity teams competed in the ultra-competitive, annual Harrier Invitational cross country meet at Mustang’s Wild Horse Park, which is one of the biggest events of the year with over 500 runners.

The race is ran under the lights of the park and last year’s meet was believed to be the first night high school cross country race in state history.

The course saw a few winding loops as the park turned on the soccer, baseball and softball field lights to help illuminate the path in addition to the standalone lights.

The Bluejays finished eighth overall in the Class 6A-5A race, while the Lady Jays finished in sixth place.

Be the first to comment on "Bluejays, Sallee win first race of the season; run under the lights"