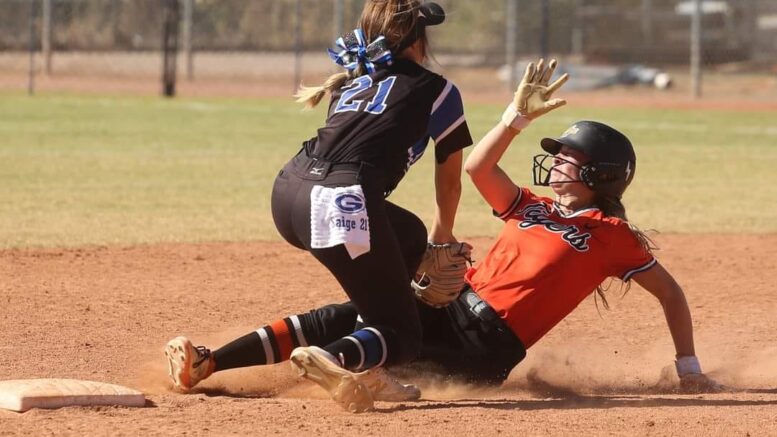 Guthrie shortstop Saige Driscoll applies a tag on a Coweta baserunner for an out at Hall of Fame Stadium in Oklahoma City. Photo courtesy of Shawn Ingle.

The Guthrie High School softball season came to an end Friday afternoon at Hall of Fame Stadium in Oklahoma City. A season that will be remembered for some time.

The Lady Jays were unable to get the offense going in a 4-0 season-ending loss to Coweta.

“We ended one game short of our goal but accomplished so much,” fifth-year head coach Booker Blakley said.

Guthrie got first-inning singles from McKenna Tucker and Abbie Eichler but was unable to score by leaving the bases loaded. From that point on, Guthrie managed only three base runners, including an intentional walk.

The day before, Guthrie plated a run in the 10th inning to take down the three-seed, Tahlequah, 8-6. The win was the first-ever state tournament win for the program. It was also the first for Blakley who earlier this year collected his 200th coaching victory.

“Some of the things that this group did though go way past the numbers and the wins,” Blakley said.

Blakley, who has now led the Jays to three state tournament appearances, was without sophomore Haley Gallo for a good part of the season due to an injury. Gallo popped 15 home runs a season ago but was forced to watch her teammates while wearing a sling.

Moving forward, Guthrie says goodbye to one senior in Ashlee Eichler while adding more talent from the successful junior high program to go with already a young team.

“We graduate a great one, but only one,” Blakley said of Eichler. “So, we expect to be right back here again next season and plan to extend our season to that last day.”