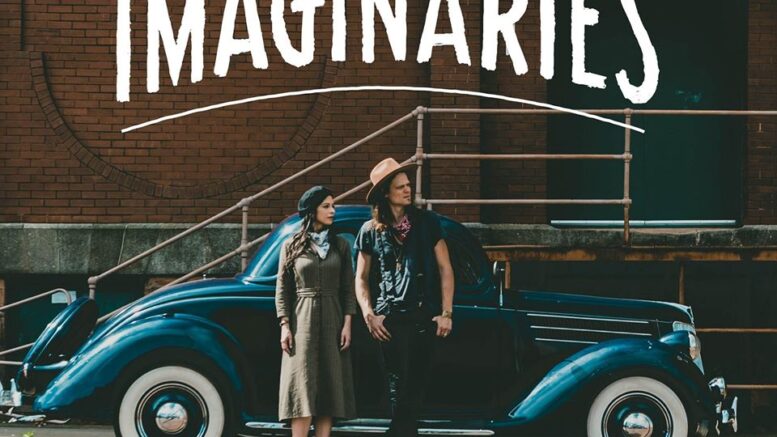 The video shows the duo on the run after quitting their outlaw lifestyle to live up to their true calling of spreading their newfound message of love, faith, perseverance, and positivity through their music. “’Revival’ is a spiritual song about finding hope and salvation,” says Maggie and Shane. “Our faith has an impact on our everyday lives and in our songwriting.  ‘Revival’ is complete with biblical references from ‘not storing up treasures on earth,’ the warnings of ‘the love of money,’ and the mission of ‘spreading the good news.’  We all need a revival now more than ever!”

American Songwriter says, “Presented with a brief but instantly adventurous and gripping introduction for the first two minutes of the video, once the music of ‘Revival’ kicks in, the full strength of The Imaginaries’ musical skill…from delta blues to harmonizing gospel, to a touch of outlaw country colliding with Baptist lyrical metaphors. Moment to moment, the energy and performance personality put forth by McClure and Henry also flash moments reflecting Lindi Ortega’s vintage, southern-focused sound and aesthetic, Miranda Lambert’s unyielding vocal sass, Dan Tyminski’s unapologetically religious-minded messaging, and James Bay’s slick but sensitive crooning.”

Filmed all over Oklahoma, the video was also selected to be screened at Oklahoma’s virtual deadCenter FIlm Festival this weekend, June 13 at 10:00am CT along with a free outdoor screening of the video at 9:00pm CT during the Okie Shorts Mixtape Screening at Scissortail Park in Oklahoma City that night (social distancing will be observed). “Revival” was also selected to be screened at Tokyo’s Lift-Off Film Festival this month too.  The Imaginaries have been promoting the song, video, and screenings all week.  They were on Good Day Tulsa (KTUL-TV ABC) – watch it HERE and Living Oklahoma (FOX) performing for their “Morning Inspiration” segment – watch it HERE yesterday.  Today, they will be doing a Facebook Live “Revival” Single + Music Video Release Celebration Livestream and Q&A at Noon CT from their Facebook page.  On June 18 at Noon CT, they will also do a Facebook Live Show on their Facebook page in conjunction with deadCenter film festival & Arts Council OKC for their Art Moves series.

The Imaginaries were gearing up to release their debut album last year and go on tour when they had a series of setbacks.  Shane had to have an emergency appendectomy.  What seemed like a routine surgery and recovery turned into many grueling months of pain and a long process to get back on his feet to be able to perform again.   Once he finally recovered the duo got the news that they were chosen to open for Brian Setzer Orchestra’s “Christmas Rocks! Tour” only to have it be canceled suddenly because Brian came down with a severe case of tinnitus.  Then Maggie had to have unexpected invasive gum surgery which kept her from singing for two months.  During this time, they worked diligently on booking shows for Spring/Summer 2020 to support their pending album release when Covid-19 took hold of the world.  With everything on hold, The Imaginaries have been doing a string of livestream performances including their Facebook Live Concert Series “Quarantunes,” Rockwood Music Hall’s Rockwood Livestream Concerts series, Monday Monday at the Hotel Café, as well as local Oklahoma performances for the city of Norman for their Stay Home Be Social Facebook live concert series, Norman NEXT for their Quarantiny Desk Facebook Live Concert Series, and for Stillwater’s Gypsy Cafe Reimagined, a benefit concert for the Red Dirt Relief Fund, which aired on O’Colly TV (ROKU, Apple TV, etc.) April 29.