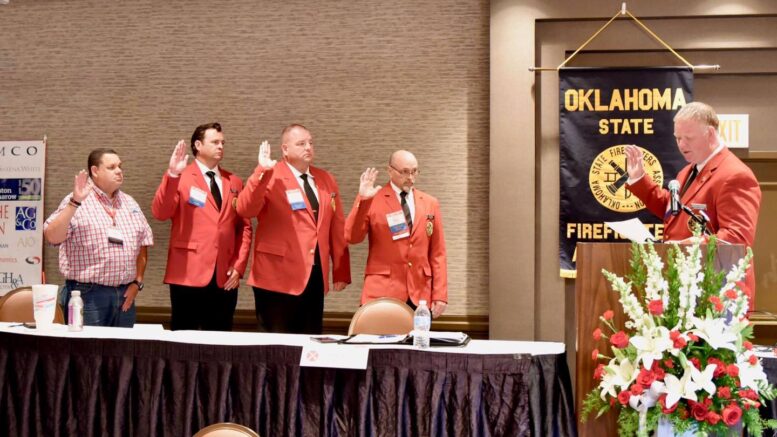 Guthrie Fire Chief Eric Harlow (pictured third from the left) is sworn in as the annual OSFA convention in Oklahoma City.

Guthrie Fire Chief Eric Harlow was sworn in as the new president of the Oklahoma State Firefighters Association during their 126th annual convention over the weekend.

“I am extremely honored and humbled at the opportunity to lead our organization,” Harlow said. “We have a very talented and experienced executive board and I look forward to working with everyone for this next year.”

Harlow served the previous year as the association’s 1st Vice President. He will now lead one of the oldest organizations in Oklahoma, which was founded in 1894 by the Guthrie, Oklahoma City, and El Reno Fire Departments.

The OSFA represents over 16,000 members of paid, combination, and volunteer fire departments in Oklahoma.

As part of his duties as President, Harlow is charged with hosting the 127th annual OSFA Convention in June 2021 to be held in Guthrie. The event will bring over 300 firefighters from across the state for the week long event.

Harlow has also been appointed as the new Chairman of the Board for the Oklahoma Firefighters Pension & Retirement System. This board oversees the retirement system for all paid and volunteer firefighters in the State of Oklahoma.