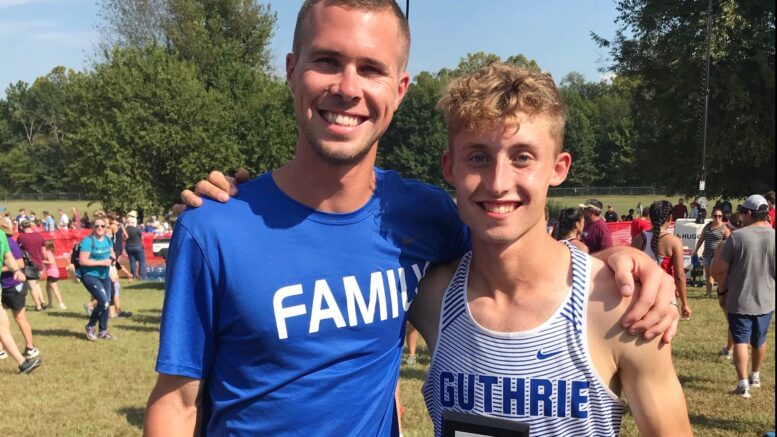 The Guthrie Bluejays traveled 17 runners to compete at the Chile Pepper Festival in Fayetteville, Arkansas over the weekend. Both the boys and girls had some great performances as nine runners ran personal best times.

Among them was senior Trevor Sallee, who set a new school record. For over 30 years, Paul Dressen held the school’s 5000 meters record of 16:10. If anyone was capable of beating that, it had to be Sallee.

As a sophomore he was already running under 16:30 and got closer this season to capture the record.

“He ran very smart, it is not easy to run a race where there are 750 kids,” said head coach James Strahorn.

At the mile mark, Sallee found himself in 67th place. His experience and mental strength helped the senior work his way up to 14th place as he crossed the finish line at 15 minutes and 55 seconds.

Not only is he the first Guthrie runner to go under 16 minutes, but he is currently ranked fifth in the state of Oklahoma (second in 5A).

“It feels great, a lot of work goes into it,” said Sallee who now has his eyes set on becoming a state champion.

The Bluejays will run the October 15 at the conference meet in Carl Albert. The Lady Jays are pushing for a third straight conference title.

Rodrigo Solis Ruiz is a graduate of Guthrie High School is attending Oklahoma State University and majoring in sports media.