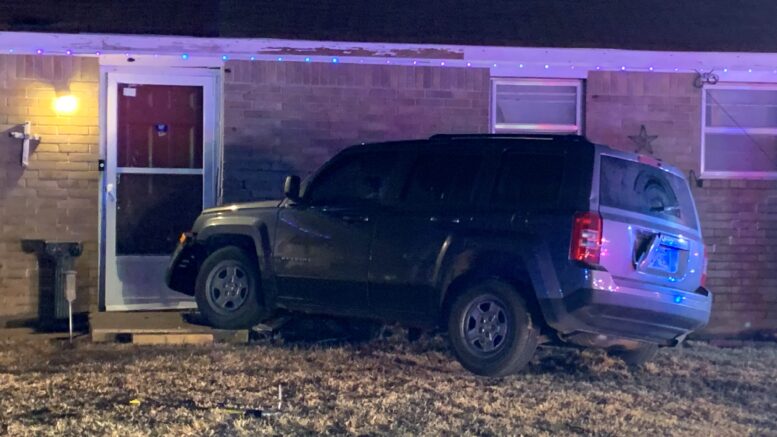 Updated at 8:30 a.m. — Sheriff officials have identified Alex Cordova as the driver in the pursuit. He’s the lone suspect at this time.

The female that was left behind is not a suspect, but deputies would like to speak with her.

A couple was shaken out of their bed Tuesday night after a vehicle slammed into their home. The same vehicle that led Logan County deputies on a high-speed chase throughout the southern portion of the county.

At around 11 p.m., two deputies with the Logan County Sheriff’s Office spotted a gray Jeep Patriot parked on Charter Oak Road between Westminster and Anderson Road. As the deputies drew closer with their units, the Jeep began to back up nearly hitting one of the patrol vehicles.

Before taking off, a woman exited the vehicle and was left behind as the Jeep sped away and the deputies followed.

While on Sooner Rd., one of the deputy’s vehicles became immobile leaving only one deputy left in the pursuit with backup coming but still a way out.

The Jeep was moving as fast 80 mph in a residential neighborhood before heading back north on Coltrane.

Once on Coltrane, speeds reached over 110 mph.

As the pursuit approached Simmons Road, the Jeep lost control, hit an embankment and crashed into a home. The impact caused the Jeep’s airbags to deploy and broke loose several bricks on the home.

Despite the crash, the driver was able to take off on foot with the deputy following closely behind. However, the man was able to jump several fences and escape into the dark.

Deputies were able to setup a perimeter but was unable to locate the suspect. Despite not finding the man, or the woman, police know both suspects extremely well and continue to investigate.

Inside the vehicle, police were able to locate drug paraphernalia.

Be the first to comment on "VIDEO: Police chase over 100 mph ends with car slamming into home"