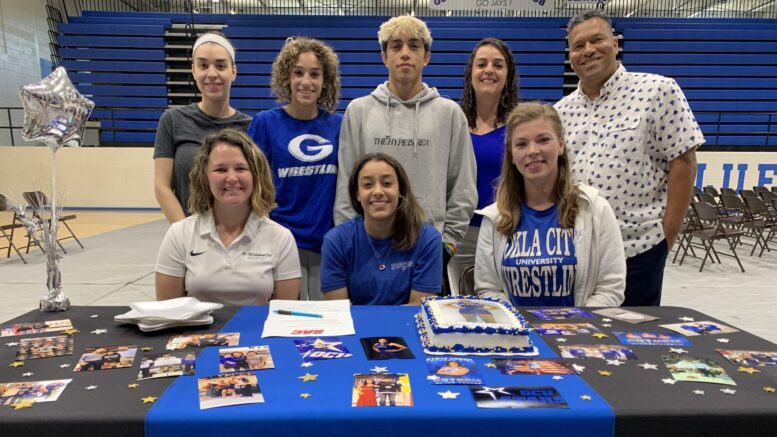 Guthrie High School has their first ever female athlete to sign a scholarship to wrestle in college. Khaleah was also the first GHS female wrestler ever to win a state championship.

Kirk, a junior, signed with the Oklahoma City University wrestling program in the high school’s gymnasium Tuesday in front of family, coaches and friends.

“I want to thank everyone who has helped me this far,” the shy Kirk said to the assembled crowd.

The two-time All-American is a three-time finalist and captured the 120-pound state championship this past February. Just minutes before her win, her brother Eli Kirk also captured a state title.

“Her achievements over the past three years has been phenomenal,” Davenport said. “This girl continues to break records and etch her name in Guthrie history.”

Oklahoma City head coach Nicole Tyson said Khleah was one of the first girls she had met prior to taking the coaching position three years ago.

“I knew that the first time that I met her that I wanted her on my team. I was honored when you wanted to be a part of my program.”

She continued, “she’s only getting started. She will be a huge asset to our team.”

Be the first to comment on "Watch: Khaleah Kirk signs to be a Star"