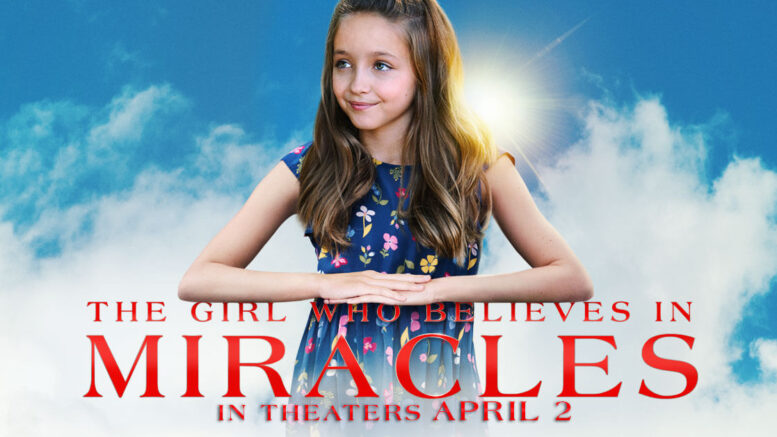 120dB Films and the Oklahoma Film + Music Office, in conjunction with Gerson Productions, The Mustard Seed Production and Trailmaker Productions, are proud to announce the theatrical release of the film “The Girl Who Believes in Miracles” on Friday, April 2, 2021.

Written and directed by Rich Correll (“Hannah Montana”, “Fuller House”) and produced by Laurence Jaffe, “The Girl Who Believes in Miracles” tells the story of a young girl named Sara who takes God at His word and prays for people in her small town to be healed. The faith-based film stars Oscar winner Mira Sorvino (“Mighty Aphrodite”, “Do You Believe?”), Austyn Johnson (“The Greatest Showman”, “The Post”), Kevin Sorbo (“Let There Be Light”, “God’s Not Dead”), and Emmy Award winner Peter Coyote (“E.T. The Extraterrestrial”, “A Walk To Remember”).

“The Girl Who Believes in Miracles” (former working title “The Mustard Seed”) was filmed in Oklahoma throughout the communities of Guthrie, Mustang, Bethany and Luther in September 2018. The film created 374 local jobs and a had direct impact of over $3 million in Oklahoma throughout the production process. Additionally, “The Girl Who Believes in Miracles” utilized the music incentive afforded by the Oklahoma Film Enhancement Rebate Program for productions that record or license music in Oklahoma, working with Castle Row Studios in Oklahoma City to record the film’s musical score.

“Working on this film was an absolute dream. We were able to bring nearly 40 of Oklahoma’s most talented musicians into one room and create something truly special,” said Garrett Starks, owner of Castle Row Studios. “I can’t wait for people to hear the magic that lives within this score. The composer, Craig Flaster, brought incredible vision, and our Oklahoma musicians made it come to life.”

“The Girl Who Believes in Miracles” is showing statewide at several select theatres in Oklahoma City, Lawton, Ada, Sapulpa, Stillwater and Yukon. Audiences can also visit the film’s official website to request a screening in their communities.

“We’re thrilled to finally be able to share more about the production of ‘The Girl Who Believes in Miracles’ and celebrate the hard work, talents and diversity of our local workforce, infrastructure and communities which will be recognized on the big screen with the film’s theatrical release,’” said OF+MO Director Tava Maloy Sofsky. “Working with these filmmakers throughout their production in Oklahoma was a pleasure, and we couldn’t be prouder of the continued impact this production will now have in shining a continued spotlight on Oklahoma’s film and music industry.”

Be the first to comment on "Watch Trailer: “The Girl Who Believes in Miracles” coming to theatres April 2"