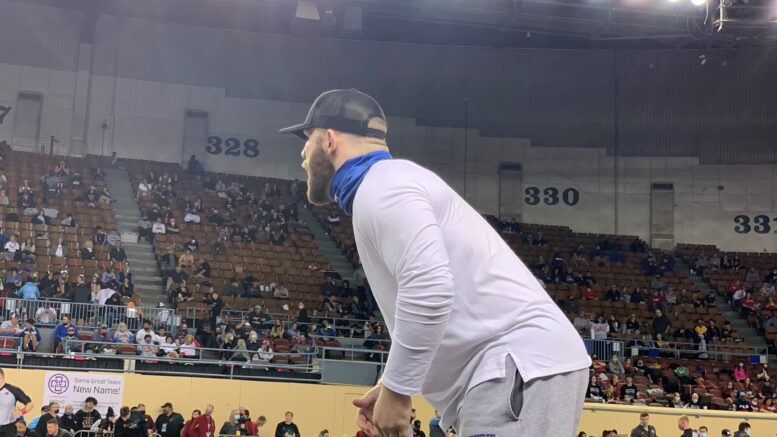 Update — The Guthrie Bluejays finished the 2021 State Wrestling Championships with three third place finishers along with a fourth place finisher.

Coal Madison was left without an opponent in the medal match after Durant’s Jake Jamison suffered an injury in his previous match.

Madison finishes his sophomore season with a 15-1 record.

At 220 pounds, it came down to sudden death overtime with junior Hayden Simpson and Pryor’s Caden Felts. In the ultimate tie breaker, Felts, the one seed from the east, made a quick escape for the 3-2 win.

Simpson finishes his season at 28-9.

Update — Eli Kirk controlled his entire third place match and finished with a 7-3 win over Kasen Miller of Carl Albert.

Kirk, wrestling at 113 pounds, took a 7-0 lead into the third period and never was threaten.

At 126 pounds, fellow sophomore Braden Hall got some sweet revenge with his win over Piedmont’s Levi Buckridge, who defeated Hall in the regional championship.

The opening round of the Class 5A boys State Wrestling Championships on Friday got off to a great start with five of the seven Guthrie Bluejay qualifiers earning quarterfinal wins inside the Jin Norick Arena in Oklahoma City.

The next round was not so favorable with a 1-6 team record. However, the Jays will have four state medalists by the end of Friday night. Each wrestler will go for third place.

At 113 pounds, sophomore Eli Kirk (23-10) had no problem with his Coweta counterpart to begin the tourney with a 10-0 major decision.

His next match with Collinsville’s Clay Gates, the match came down to the final 30 seconds of the ultimate tie breaker. With Kirk in the down position, he was unable to escape and fell to the one seed from the east.

Kirk, the two seed from the west, responded in a dominant fashion by blanking his Piedmont opponent 9-0 to advance to the third-place match with Carl Albert’s Kasen Miller.

At 126 pounds, sophomore Braden Hall (21-12) started his tourney with a 6-1 win over his Sapulpa opponent. In the semifinals, Hall dropped the match by fall (4:17) to top-seeded Cole Brooks of Collinsville.

Needing to win his next match to medal, Hall controlled the entire match with a 12-3 major decision over Shawnee’s Angelo Reyes. Hall will now battle Piedmont’s Levi Buckridge in a regional championship rematch.

Dean Madison finished his senior campaign with a 1-2 state record. Madison, a two-seed from the west, started the tourney with a 12-7 decision over his Sapulpa opponent before dropping his next two.

He finishes the season with a 15-7 record.

At 195 pounds, sophomore Coal Madison will go for third place by going 2-1 in the first session.

Coal Madison (14-1), the top seed from the west, only needed 1:15 to pin his Durant counterpart Alex Jamison to advance to the semifinals. In the semis against El Reno’s Michael Devereaux, the sophomore fell 4-2 in sudden victory.

He responded quickly in the following match with a pin coming 1:17 in the first period over Lawton MacArthur.

Madison will now square off against Jamison for third place.

At 220 pounds, junior Hayden Simpson is 2-1 in the tournament and will challenge Pryor’s Caden Felts for third place.

Simpson, a three seeded junior, pinned his Collinsville opponent in the early portions of the third period. In the following match, the tides were turned as the top seeded wrestler from Piedmont collected the fall (1:17).

In the match to get on the medal stand, Simpson (28-8) made short time of his El Reno opponent with a pin coming 68 seconds from the start.

In the heavy weight class, Riley Boyster finished his junior season with a 17-14 record by going 1-2 in the state tournament. Boyster’s win came in his second match of the day by fall (3:21).