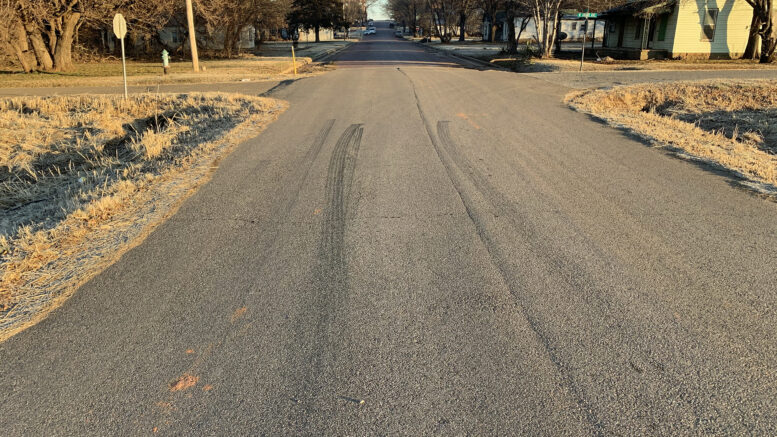 A drug deal gone wrong has left one person in the hospital with severe injuries and another person behind bars following a vehicle versus pedestrian accident. The incident took place late Friday night near Mineral Wells Park.

Emergency personnel responded near the intersection of 2nd Street and Grant Ave. at approximately 11:39 p.m.

An 18-year-old witness says he and his 17-year-old friend were attempting to purchase marijuana from Joshua Jeremiah Zimmerman, 19, of Moore. The arrangement, made through Snapchat, was to meet at Mineral Wells Park to exchange 10 grams of marijuana.

The two male friends decided to rob Zimmerman (pictured below) when he arrived at the park. When they took off with the drugs, two people got out of Zimmerman’s vehicle and began to chase them.

The witness says he observed the vehicle driving at a high rate of speed and later heard someone crying for help. The witness said he found his friend bleeding from his head.

At the same time, the victim asked the witness to hide his pellet gun. The witness said he threw the gun into the trees near 2nd Street. The gun was later found by police.

The incident left the 17-year-old with a broken leg, hip and multiple staples in his head. He was transported to Mercy Hospital Logan County and mediflighted to an Oklahoma City hospital, where he remains.

Police located Zimmerman and the vehicle at his apartment complex in Moore. Zimmerman pointed to the hood where a large dent was found along with another dent near the windshield.

According to a police report, Zimmerman admitted a drug deal had been arranged and that when he arrived to the park the victim told him he had a weapon.

Zimmerman later explained the victim heard his vehicle, turned around, put his hand in his waistband and took a gun out. Zimmerman stated he believed the victim was going to shoot him, according to the document.

Zimmerman said he struck the victim with his vehicle and proceeded to travel back to Moore without reporting the incident.

Police say Zimmerman failed to use his cell phone or stop to make a call to police or EMS about the injured person.

The case continues to be under investigation with possible additional charges being filed on Zimmerman.

According to the District Attorney’s Office, they’re still awaiting tests from a MRI to evaluate if there is further damage to the vicim.

On Monday, Zimmerman was charged with assault and battery with a dangerous weapon. If found guilty on the charge, he could face up to 10 years in jail and a $10,000 fine.

4 Comments on "Botched drug deal leaves one in jail, another in hospital"