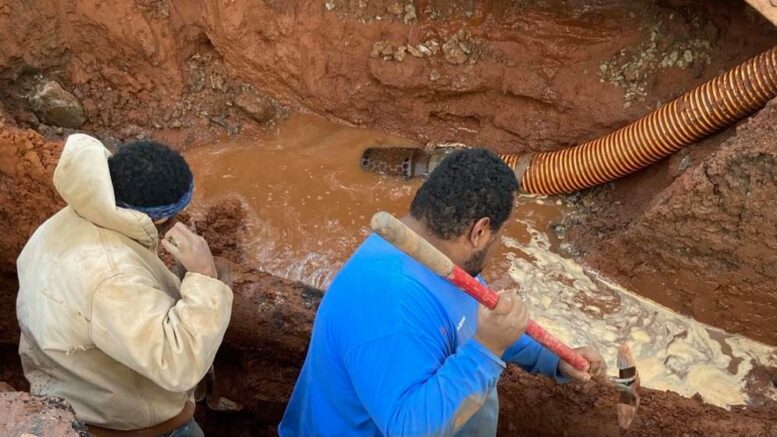 Workers from the City of Guthrie help repair a main water line along S. Division St.

Updated on April 21 — After 30-plus hours, the City’s Line Maintenance Crew was able to correct a busted water line on the city’s north side.

A contractor for AT&T, who is installing fiber optic cable, hit a service water line from a main water line. In attempt to fix the line, the main line was also struck and busted open.

Despite turning nearby and distance water valves, the water flow continued and did not allow access to the line for repairs.

Just after 9 p.m. the line was restored and valves opened back up for service.

A water line break in the city has canceled classes on Tuesday for Guthrie Public Schools.

The announcement came early Tuesday morning for the school district as city crews continue to work on a busted water line. It was determined at 2 a.m. that Guthrie High School did not have running water, despite city crews working throughout the night to fix the issue.

The school district will instead have distance learning for the day.

On Monday, contractors for AT&T were working on installing fiber optic lines in the Hill Addition (near the high school) and hit a main water line. City workers continue to address the issue, which has created low water pressure in the area.

There is a “good possibility” a larger part of the city’s population could see little to no water pressure.

City crews are searching for water valves in the area to turn off to allow lower water flow to fix the busted pipe. However, the valves that have been located are no longer working. If no other valves in the area can be found, crews will have to move to the next water station with working valves, which would shut water off to more residents and businesses.

In a statement, Guthrie Public Schools said, “We regret the inconvenience this late notice causes families but we have one site without water and expect others to possibly be without water later in the day as crews attempt to restore service to the affected area.”

Be the first to comment on "Busted water line fixed; school back in session"