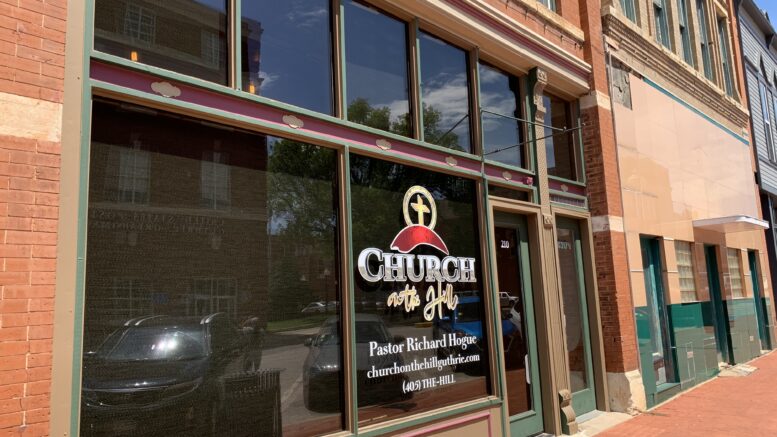 A local church has requested special use permits for both a downtown office and a church youth event center. Both were denied by the Guthrie Planning Commission and now the matter will move forward to the city council next month.

Church on the Hill filed an application for 210 W. Oklahoma to be used as a church office for their new church located three miles north of Guthrie (3150 East County Road 74). The church filed a second application to add a youth event center that would include recreational activities and youth ministry services in the building located at 202 E Harrison Ave.

A recreational use (event center, rec center, youth center) is a permitted use in the Central Business District (CBD), along with office uses in the CBD. However, a church and any related religious activities would require a special use permit, according to the local zoning codes.

The special permits were filed by James South at the property owned by AutoMax Used Cars for the location at 210 W. Oklahoma Ave. and Guthrie Property Associates at 202 E. Harrison Ave.

“Our desire to use the building is solely, honestly as an office. You can’t have people going three miles out in the country to do the weekly things. We need some place to meet in the city where we can meet.”

Hogue added the youth center would not be just a recreational place.

“We are planning on having huge concerts. We are bringing in the top, top Christian musical groups in the country. There will be symposiums, there will be seminars.”

Downtown building owner Elayne Sinon raised several concerns on the proposed church locations, including how in the past she was denied a liquor license by the ABLE Commission because of a once nearby church.

“I am all for churches, but in downtown districts they do not have revenue for the city,” she told the commission. “They also limit the rentals that we can do in our buildings.”

Sinon told the planning commission that ABLE officials informed her both proposed properties would be considered as church policies and would impose the 300 feet limit needed to obtain a liquor license.

Hogue replied by saying in the past his church has signed waivers to allow the licenses and is willing to do it again.

“I think it’s absolutely a misnomer that somehow because a church office is there that somehow we are going to limit,” Hogue said. “As far as we are concern, you can put a bar next door. It’s not going to bother us a bit.”

He continued, “A church, if it’s done correctly, can be a center of activity. We will bring a lot of people to this town. We are all for the city. We don’t want to be a hindrance. We believe in Guthrie and want to be a part of this place. If you’re going to do a festival, we want to do it with you. We may not be selling beer, but we’ll do something that will be fun.”

Joe Chappell, one of the four commissioners who were present, said without guidance from the ABLE Commission or the Oklahoma Medical Marijuana Authority (OMMA) it’s difficult to make a complete decision.

“If its offices and that’s all that it is and ABLE signs off on that, I personally wouldn’t have a problem with offices being there,” Chappell explained. “I don’t know the answer to that, whether ABLE will look at them as a church or offices.”

Chairman Kris Bryant says there are quality benefits of having a church in an urban area.

“I don’t see downtown Guthrie as primarily entertainment district only. I think it’s a real mix use neighborhood. I think there are a lot of quality benefits of having a church in an urban area, but I would not want that to adversely affect other businesses and their potential. I think the ABLE Commission’s rules are silly and exclusionary zoning and trying to regulate what goes on inside a private property is ridiculous.”

“I would like to see what the ABLE Commission has to say about it,” McBride said. “I don’t think it hurts to have an office building downtown if it is church related. You’re not holding services there. If you have an existing liquor license and a church goes in across the street, it doesn’t affect the liquor license that is there, but it’s the future you have to worry about.”

McBride made the motion and was second by Bryant to deny the special use permit and allow the church to have the allowed permitted office. McBride and Bryant voted yes, while Chappell and Abe Ghasempour voted no.

Following additional discussion, the commission voted 3-1 to deny the special use permit to allow the youth center. McBride abstain from the vote, which is recorded as a no vote.

Both recommendations made by the planning commission will now be heard by the city council on Sept. 1 for a final ruling. In the meantime, City staff says they will look for specific details and answers from ABLE and OMMA to be presented for the council’s decision.

Be the first to comment on "Church denied special use permits for downtown locations; council to make final decision"