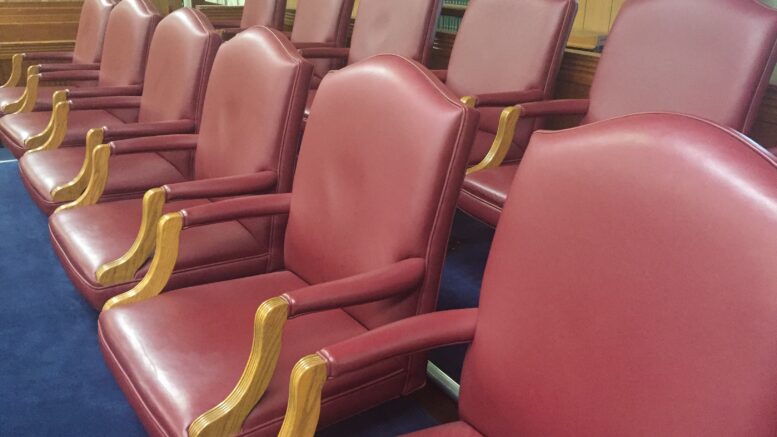 In what is believed to be the final pre-trial hearing for Nathan Leforce, both attorney teams requested additional details on Monday before the start of the August 6 trial.

Leforce, who is seen on body cam shooting and killing Logan County Deputy David Wade in 2017, sat at the defense table with his attorney team (four members) wearing a bright, orange Payne County jump suit. The defendant was surrounded with eight law enforcement officers throughout the court room wearing shackles around his wrist, waist and ankles. In addition, the man facing the death penalty sported a shorter haircut and trimmed goatee.

Some of the particulars discussed in the hour long hearing, included expert witnesses, how evidence will be delivered, how the body cam video will be shown and what Wade’s family members can wear throughout the trial.

The defense team asked the judge that family members understand what they can and can not wear. District Attorney Laura Austin Thomas said the family understood what is allowed and plan to wear buttons.

District Judge Phillip Corley was asked by the defense team on how Leforce would be housed during the trial. The judge said they would address that at a later time and behind close doors due to safety concerns.

The defendant continues to be housed in the Payne County Jail and is transported to each hearing in Logan County.

Jury selection is set to begin on Aug. 6.

Deputy David Wade was helping with an eviction notice at a home near Mulhall on April 18, 2017 when he was shot multiple times and later died at OU Medical Center. Related article: LeForce bound over for trial in killing of Deputy David Wade

Be the first to comment on "Final pre-trial for Leforce heard; trial set for Aug. 6"