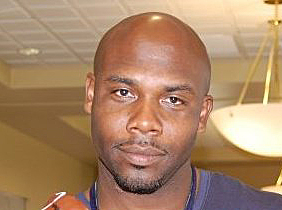 A once decorated football player for the Guthrie Blujeays and University of Central Oklahoma was found guilty by a Oklahoma County jury of raping a woman with cognitive disabilities.

Jurors needed less than three hours to convict Elton Howland Rhoades Jr. on Jan. 29 of raping a 25-year-old woman in May of 2018.

A psychologist told jurors the woman has a mental age of a six-year-old.

The jury has recommended a 10-year prison term for Rhoades, 47.

He remains in custody in the Oklahoma County Jail and will be formally sentenced on March 4.

Edmond Police learned that the victim lived at a group home and that Rhoades worked for a residential service associated with the group home.

The victim told jurors Rhoades invited her to the movies, drove her to his home and sexually assaulted her. The woman said he forced her to have sex and she tried to push him off but couldn’t because he was too strong.

Afterwards, the victim stated Rhoades drove her back home and told her to delete their messages on Facebook.

The victim was able to identify Rhoades and details about his home.

Rhoades denied knowing the woman was developmentally disabled or was a resident of the group home. He told jurors he was showing her his house when she took off her clothes and initiated sexual contact.

Rhoades, a 2009 Hall of Fame class for UCO, was a standout player early in his Broncho career, wrapping it up with 11 interceptions, 10 passes and 55 tackles in his senior year. He was a first-team All-Lone Star Conference pick, was a consensus first-team All-American and was selected to play in the Division II All-Star Game in 1993.

UCO President Patti Neuhold-Ravikumar said the Athletics Hall of Fame honors have since been rescinded. The football star was previously listed on UCO’s Hall of Fame web page, but now no longer exists.