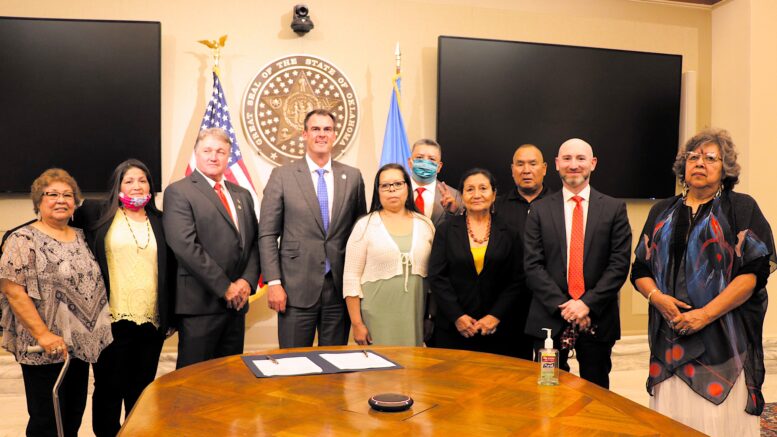 The State of Oklahoma and the United Keetoowah Band of Cherokee Indians (UKB) signed a 15-year gaming compact that permits the tribe to engage in Class II and Class III gaming in Logan County.

Officials with the UKB in Oklahoma met with Gov. Kevin Stitt on Wednesday at the State Capitol to sign the compact. Read the signed compact.

“The compact includes a commitment from the State to support the UKB’s pursuit of land for its first gaming location,” said Stitt. “This will enhance the UKB’s ability to deliver core government services to its 14,300 citizens while expanding economic development opportunities for all Oklahomans in the region.”

The Logan County location will require an additional Section 20 application to the Bureau of Indian Affairs (BIA).

UKB officials tell Guthrie News Page they are awaiting information before disclosing the location within in the county.

“It is a day when one of their own partnered with Oklahoma in building a stronger economy through the avenues of retail, food and beverage, hotel, hospitality and casino operations, all by a signing a Class III gaming compact with the state,” UKB Chief Joe Bunch said.

“This compact also presents an opportunity for the UKB to move forward and begin increasing health, education and job opportunities for our tribal members and elders, as well as our surrounding communities.”

The compact allows the UKB to operate facilities offering Class II gaming, such as bingo, and Class III gaming including slot machines and roulette through Dec. 31, 2035.

Agreed upon terms include the United Keetoowah Band paying 18 percent in exclusivity fees on its adjusted net win amounts to the state for “nonhouse-banked card games” and “nonhouse-banked table games.”

Along with obtaining a Section 20 application, notification of the compact has been sent to the U.S. Department of the Interior. The Secretary has 45 days to approve the agreement under the Indian Gaming Regulatory Act for it to take effect and for notice to be published in the Federal Register. Upon approval, the tribe can begin building and operating its facility.

“This is a monumental day for Keetoowahs. I wanted to thank Governor Stitt and his council that’s worked to put this compact together with our Attorney General Klint Cowan and our council,” said UKB Assistant Chief Jammie Thompson.

“We’re trying to create a win-win situation for all Oklahomans and certainly for our tribal members. We’re looking forward to a long relationship with the state that benefits not only our tribe, but our citizens of the great state of Oklahoma.”

UKB joins the Comanche Nation, the Otoe-Missouria Tribe and the Kialegee Tribal Town in renegotiating and signing gaming compacts with the state. Related article: New tribal compact proposes a casino in Logan County