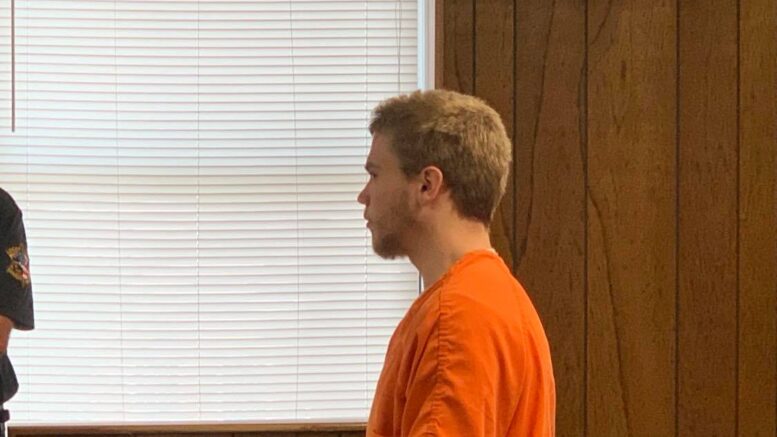 David Stewart, an inmate inside the Logan County Jail, apologized to Judge Susan Worthington following his outburst towards the judge. His verbal actions kept him in jail without bond.

Stewart, 22, was arrested and charged last week with assault and battery on a Guthrie officer during an arrest warrant. As officers attempted to put Stewart into handcuffs, he bit an officer on the wrist. Related article: Man accused of biting officer, curses at judge; held without bond

The following day, Stewart appeared by video in front of the judge for his formal arraignment. During the proceeding, Stewart became uncooperative and disrespectful to the judge. Stewart even began to curse at the judge.

Due to his verbal outbursts, the judge ordered Stewart to sit behind bars without bond.

Six days later, Stewart had a second opportunity. This time he appeared in person in front of the same judge. He was seen wearing pink handcuffs around his ankles, blue cuffs on his wrists and his jail issued orange suit with black sandals.

“Are you feeling a little more respectful today than you were when I last saw you,” the judge asked.

Stewart replied, “Yes. I wrote a letter to you.”

The judge read – to herself – the note written on a white piece of paper. She quickly accepted his apology.

“I appreciate the apology and I accept it,” the soft spoken judge told Stewart. “I hope you realize how serious it can be if you’re (not respectful).”

“Have a good day, your honor,” Stewart told the judge as he was escorted out of the courtroom.

Stewart was given a $75,000 bond on the assault charge. He was also given a second bond of $75,000 on a separate charge last month for burglary in the first degree.

In November, Stewart pled guilty to concealing stolen property and possession of drugs. He received a five-year deferred sentence.