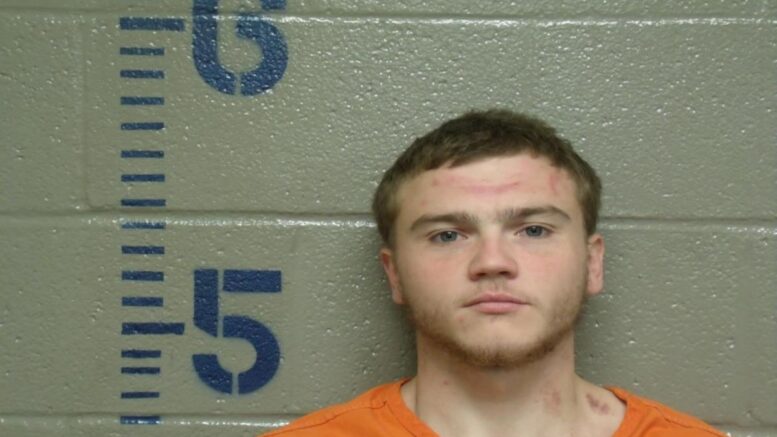 Updated on Sept. 25, 2021 — Inmate apologizes with written letter to judge for his outbursts

A suspect sits in the Logan County Jail for an extended amount of time after he became extremely uncooperative and disrespectful to a Logan County judge during his arraignment.

Guthrie police arrested 22-year-old David James Stewart on an assault charge on an officer after he allegedly bit an officer on the wrist.

Officers were attempting to find Stewart inside a home in the 600 block of E. Harrison Ave. on two outstanding warrants. In November, he pled guilty to concealing stolen property and possession of drugs and received a five year deferred sentence. However, he did not appear for a court hearing in June of this year and again last week.

Stewart was also charged with burglary in the first degree just last month.

As officers entered the home, Stewart attempted to run and escape out a back door. A detective was able to take Stewart to the ground. In the process, another officer gained control of Stewart’s arm and that is when the suspect bit the officer’s wrist leaving noticeable red markings.

Once in custody and being escorted to a police cruiser, Stewart attempted to escape from an officer and was forced to the ground.

On the following day (Sept. 16), Stewart was being formally arraigned for the charge of assault and battery on a police officer. During the proceeding, Stewart became uncooperative and disrespectful to the judge. Stewart reportedly even began to curse at the judge.

Stewart’s actions was not the best of ideas as the judge ordered Stewart to jail without bond until further notice.

A juvenile (17-years-old) and an 18-year-old were taken into custody for harboring Stewart inside the residence. The adult female has not been formally charged with a crime, but remains in jail.

Investigators report they believe the adult, believed to be the girlfriend of Stewart, made a bogus call in attempt to get the officers to leave the residence. After several attempts by the police to have someone come to the door, the females finally came out.

Be the first to comment on "Man accused of biting officer, curses at judge; held without bond"