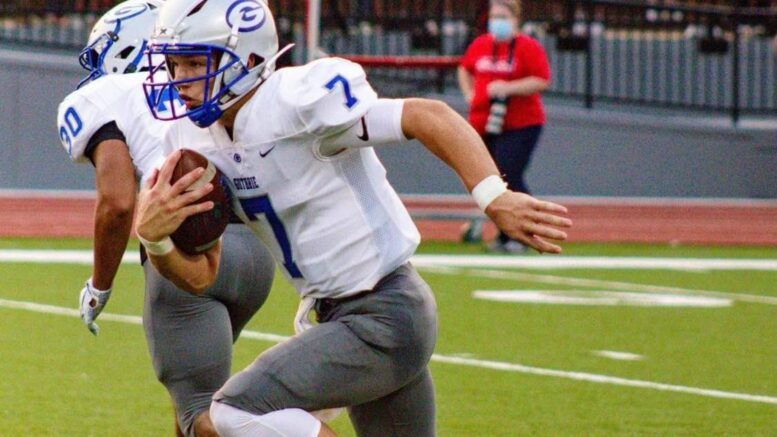 Sophomore quarterback Hayden Calvert takes off on a run in a 41-7 road win in Duncan. Photo courtesy of Kaia Calvert.

For the first time in the 2021 season, Guthrie found themselves trailing with an early second quarter score by Duncan. After that, it was back to Guthrie Football.

Over a four-minute span in the second quarter, the Bluejays put together four scoring drives en route to a 41-7 road win in Duncan. All four scores came through the air from sophomore quarterback Hayden Calvert.

For the second straight season, the Jays are 3-0 in non-district play, while Duncan falls to 1-2 to begin the season.

After a scoreless first quarter, Duncan was forced to punt early in the second quarter. With a short, low line drive kick, the football bounced off the back of a Guthrie player and was recovered by the Demons. A short time later, quarterback Kenny Garland scored on an 11-yard run.

Less than 90 seconds later, the Jays were on the board. Calvert set back and found a streaking DeAndre Jones for a 31-yard pass and score to the game, 7-7.

The sophomore and senior connected again on their next possession. This time, Jones was wide open in the end zone to haul in a 17-yard score with 3:09 left in the half.

Guthrie’s defense began to flex their muscles and with timely timeouts called by the coaching staff,, the Demons were forced to go three-and-out and forced to punt.

With a short field at the Duncan 35-yard line, Guthrie did not need much time to score as Calvert hit sophomore Jaylen Harper on a 29-yard pass to increase their 21-7 with 1:58 left until halftime.

With another Guthrie defensive stand, Duncan punted the ball back to Guthrie. The Jays took over from their own 37-yard line with just 58 seconds remaining in the half.

Calvert would again lead the Jays down the field by going 6-of-9 passing – with two drop passes – with a 3-yard passing score to junior half back Carson Wilder to finish a 56 second drive. The latest score sent the Jays into the locker room with a 27-7 lead.

Calvert finished the night 16 of 22 passing for 195 yards to go with the four second quarter passing scores. He was named the North Church Player of the Game.

In the third quarter, junior running back Isaiah Hammons got the rushing game going in the scoring column. He finished with two third quarter scores, including a highlight 56-yard touchdown run, to secure the win before the midway point of the third quarter.

Hammons finished the night with 18 carries for 125 yards and two scores. He finished the non-district with eight rushing touchdowns.

Guthrie has now won 9 of their last 10 meetings with Duncan. Also with the win, Kelly Beeby won his 50th game as the Jays head coach.

The Bluejays will be off this week with their scheduled bye week. They will next be in action on Friday, September 24 when they travel to Piedmont.