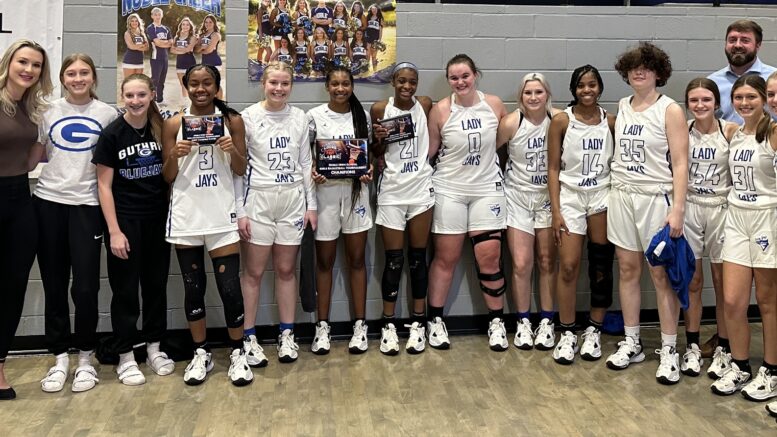 Last week was one of the busiest weeks of the high school basketball season with tournaments all over the state taking place. For the Guthrie High School programs, it was a really good week.

The Lady Jays participated in the Noble Tournament and picked up three wins to win the tournament title. All three wins came against Class 5A opponents, which will help later in the season when coaches determine playoff positions.

The first win came on Thursday with a convincing 52-33 win over Mt. St. Mary’s. The following evening, Guthrie took on tournament host Noble and escaped with a 7-point win to advance to the championship game.

Waiting for the Jays was 5A defending state champion and 10th-ranked McAlester Lady Buffaloes.

For the second straight night, it was a 7-point win but this time for the tournament championship.

Anjewl Murillo was named the tournament’s Most Valuable Player. Ania Morgan was named to the All-Tournament team.

First-year head coach Breck Clark has the Lady Jays playing with confidence. Currently ranked 19th in 5A, the Lady Jays are for sure moving up the poll.

Guthrie improves to 6-3 overall with all three losses coming against highly ranked teams, including the first two games of the season.

For the second time this season, head coach Sean Morgan and the Bluejays squad finished a tournament with a third-place finish. This time in Weatherford and the first coming earlier this season in Woodward.

Guthrie got on their winning ways on Thursday with a 57-45 win over Elgin to advance to the winner’s side of the bracket. However, dropped their next game to Class 4A’s eighth-ranked Tuttle Tigers, 62-53.

Both teams will be on the road this week with a trip to El Reno on Friday.

In the following week, both teams will participate in the third and final tournament with the Kingfisher Tournament January 19-21.

Be the first to comment on "Lady Jays win Noble tournament, Bluejays take third in Weatherford"