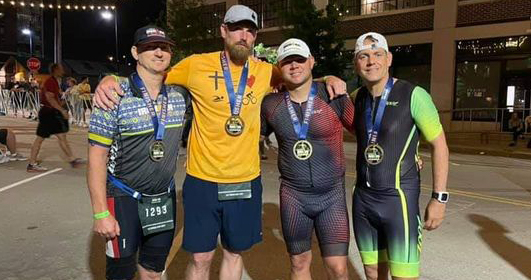 Nearly 2,000 athletes from all 50 states and 30 different countries, including four from Guthrie, competed at the IRONMAN triathlon in Tulsa. If the nearly 141 mile journey was not enough, the athletes were on a time limit to finish.

Just to finish is amazing, but Mike Mayer, Shaun Coffman, Dave Countess and Josh Williams did not need the full allotted 17 hours (7 a.m. to midnight) to finish the event.

The competition began with a, um, casual 2.4 mile swim, followed by a leisure 112 mile bike ride and just to make sure it’s really fun ended the race with a 26.2 full marathon run.

Coffman described the bike race as “nasty” as they were all pushed past their limits in the 140.6 mile event.

For Coffman and Countess, they have now competed in four triathlons (Houston, Tempe, Boulder and Tulsa), Williams third as he missed the Boulder event due to being deployed in Afghanistan, and Mayer’s second (Houston and Tulsa).

All four competed for the U.S. Dualathalon team in Chicago at the 2015 International Triathlon Union World Championship.

Be the first to comment on "Locals compete in 140.6 mile ironman event, again"