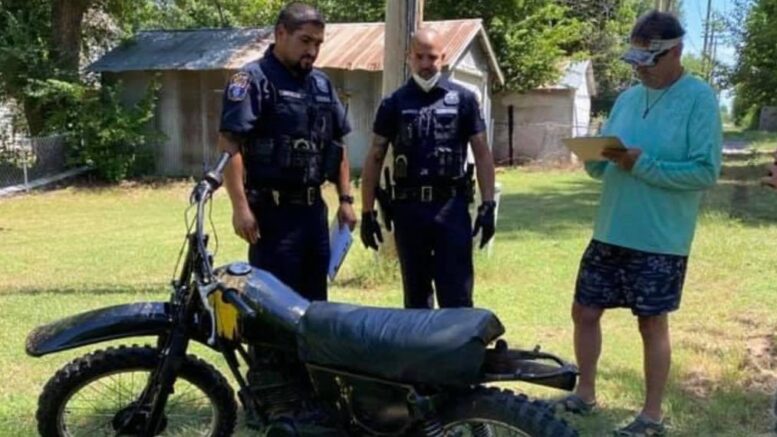 A Guthrie citizen filed a police report after his motorcycle had been stolen. As luck would have it, the owner located an individual riding his dirt bike soon after and the chase was on.

Greg Gibson filed the report with the Guthrie Police Department on Sunday stating his yellow 1995 Suzuki dirt bike had been stolen.

Soon after, Gibson and his family prepared for a family outing and stopped by a convenience store. As they began to leave — there it was — the dirt bike. Although painted a different color, Gibson knew it was his bike.

Gibson began to follow the bike back into town. In the process, Gibson’s wife was on the phone with police relaying information.

Near Noble Ave. and Oak St., Gibson says he caught up the male driver and told him to get off the bike. The driver stated he had bought the bike, and suddenly took off, but crashing out a short time later in a nearby alley.

After the crash, Gibson was able to pounce on the suspect. With Gibson on top of the suspect, the driver began yelling, “Help, help! I’m being robbed.”

Gibson, who is the Chaplin for the Territorial Riders, said the male tried leaving again. “You’re not going anywhere with my bike,” Gibson told the male as the police began to arrive.

According to the police report, officers found the dirt bike to have been recently spray painted black as the paint was coming off and was on the suspect’s hands and stomach.

The believed suspect was identified by police as 29-year-old Ryan Alan Mangold.

Mangold told officers he had purchased the bike for $500, but was unable to give specific details on whom he made the alleged purchase from.

Mangold told officers he was at the convenience store to add fuel to the bike and that he took the gas cap off. However, a key was needed to take the cap off. A key that Gibson had.

Mangold has a lengthy criminal record, including convictions of unauthorized use of a vehicle, concealing stolen property and burglary.

Mangold was formally charged with unauthorized use of a motor vehicle and malicious destruction of property. He was handed down a $7,500 bond.