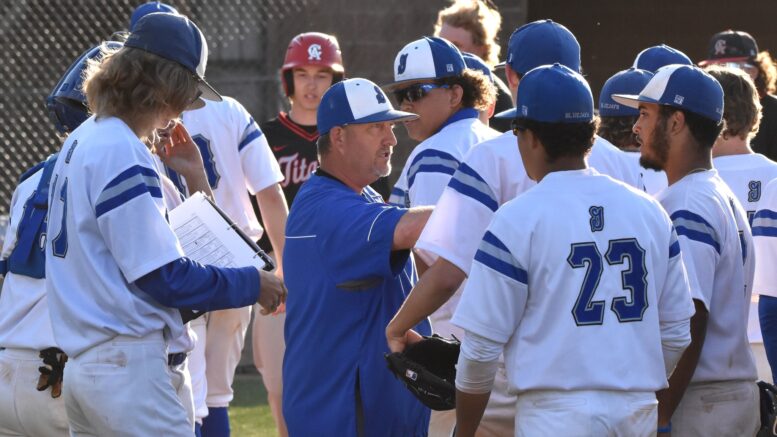 Casey Porter celebrates with his players following a home win over Carl Albert at Squires Field.

The Guthrie High School baseball program will be looking for its next skipper.

Casey Porter, who has been a teacher and coach in the Guthrie school system for the past 26 years, resigned from his coaching duties last week. However, he will continue his teaching duties with the district.

The open coaching position was placed on the school district’s website on June 29.

The Jays finished this past season with a 25-13 record. Overall, in his eight seasons, Porter piled up a 139-99 record and one state tournament appearance (2021).

Prior to being named the Jays coach, he was named the 2014 Oklahoma Baseball Coaches Association Assistant Coach of the Year.

With the wins and player relationships, Porter also took pride in the appearance of Squires Field. In 2017, the ballpark was voted unanimous by the Oklahoma Baseball Coaches Association as the state’s top playing field. Related article: Squires Field named top field for 2017 by high school coaches

The Board of Education has not formally acted upon the resignation but could do so as early as the July school board meeting.