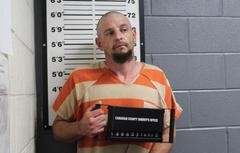 A second man has been arrested in connection with the October 1 break-in of a residence on Backhaus Road in Logan County.

At 2:30 a.m. on October 1, Logan County dispatch received a 9-1-1 call from a homeowner reporting that he had shot an intruder inside his home on Backhaus Road near Guthrie.

The homeowner heard multiple people breaking into the home, got his gun and fired in the direction of the intruders. After firing shots, the homeowner called 9-1-1 and Logan County deputies responded to the scene. Related article: One person shot dead in reported home invasion; two suspects at large

Jesse Eugene Bramlett, 45, was arrested on October 13 and is facing the same charges as Day, who remains in the Logan County Jail. Related article: Man arrested in connection with deadly home invasion