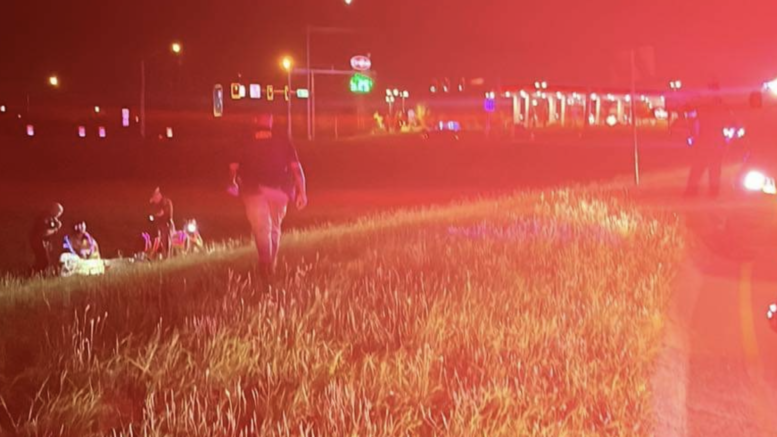 Updated at 1:30 p.m. on Friday, June 17 — Following a search today (Friday), the Logan County Sheriff’s Office has located a firearm (just before 1:30 pm) believed to have been used in this case.

According to what is believed to be the mother of the suspect, she denied a firearm was used in the pursuit with multiple comments posted on GNP social media.

The believed mother had posted that instead of a firearm, the motorcycle had backfired.

Updated at 9 a.m. — The Oklahoma Highway Patrol released the name of the female passenger and a few other details from this morning’s pursuit with a motorcycle.

The motorcycle driven by Dylan Matthew Jackson was a 2006 Yamaha.

Troopers said when they became involved in the pursuit, Jackson was traveling at 120 mph.

The pursuit ended when Jackson failed to negotiate the curve on the 15th Street onramp and ejected both riders.

The condition of the driver, Jackson, was described as “under the influence (DUI-D) and the cause of the collision as “attempting to elude officers.”

Two people on a motorcycle were injured during a pursuit with Logan County deputies early Thursday morning.

Just before 4 a.m., a deputy was driving on S. Division St. and noticed a motorcycle had turned onto Division St. from Prairie Grove Road. The deputy recognized the driver who has a felony warrant for his arrest.

The deputy caught up to the bike at Sooner Road. As the pursuit started towards Interstate 35, the driver shot at the deputy, luckily missing.

The pursuit began southbound, and the Oklahoma Highway Patrol was alerted of the situation and joined in at 2nd Street.

The trooper then led the pursuit, which ended at the 15th Street onramp after the motorcycle crashed out.

The motorcycle was reported traveling at 130 mph.

Deputies have been searching for the weapon throughout the path of the pursuit, but have not been able to locate it at this time, but the search is expected to continue at sunrise.

The driver was identified as 25-year-old Dylan Jackson, who pled guilty to a felony assault and battery with a dangerous weapon charge earlier this year in Logan County.

Jackson, who has numerous crime-related charges throughout the state, had a bench warrant issued for his arrest on April 5.

Jackson and a female passenger were transported by EMSA to OU Medical Center from the scene at 5 a.m.

There were no injuries reported to any LCSO deputies or OHP troopers.

Be the first to comment on "Shots fired toward deputy by motorcyclist; two injured after crashing out"