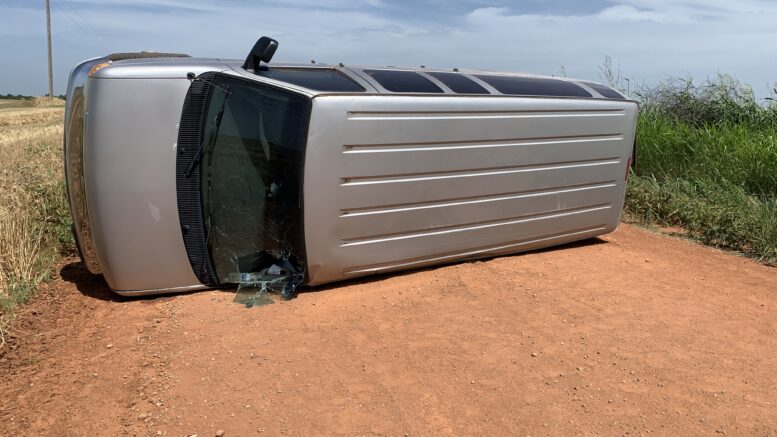 Multiple injuries to children were reported Thursday afternoon after a van rolled over on a Logan County road.

The Oklahoma Highway Patrol is investigating the crash that took place at 2 p.m. on Prairie Grove Road between Kelley Avenue and Santa Fe Road.

Early reports show 9 children were transported to various Oklahoma City hospitals, including four to OU Medical Center, two to Integris, and three to Children’s Hospital. One child was taken by a medical helicopter.

One of the children’s arms became trapped under the van after a window had broken out and the van rolled onto the driver’s side. The Guthrie Fire Department was able to free the child by using the jaws of life.

Initial reports show not all the children sustained major injuries, but some did have internal injuries.

One adult driver did not require medical transport.

The van was being used by the local non-profit facility, Hope House, which provides shelter for those that are homeless.

According to a spokesperson for the Hope House, most of the injuries were scrapes and bruises, while waiting on an x-ray.

“That’s the most severe injury,” the spokesperson said of the possible broken arm. “Thank God.”

While the investigation is ongoing at this time, some of the children were reported saying they were “going really fast” on the dirt road. The Hope House spokesperson says the van began to slide and that the driver overcorrected causing it to roll over.

OHP is expected to release a traffic report later with additional information.