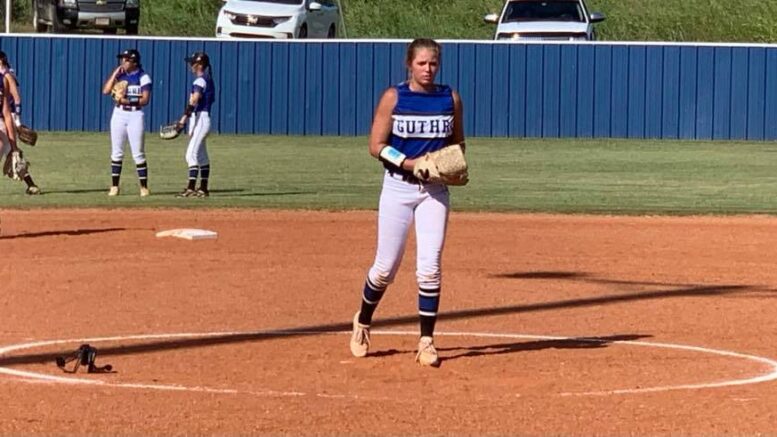 Freshmen Kinley Duehning warms up between innings against Putnam City North on August 10, 2021.

Guthrie Softball Head Coach Booker Blakley appears will have plenty of options in the 2021 season with a deep, talented pool of players.

The Lady Jays are out to a 3-0 start with home wins over Western Heights (18-0, 18-1) and Putnam City North (7-1). Three wins with three different lineups and three different starting pitchers.

Blakley inherits a talented freshmen class to go with his upperclassmen that will allow them to set lofty goals.

“I believe we have more depth than we’ve ever had and our expectations are high, Blakley said. “We must come together as one and put the team first in order to meet our goals.”

Junior Ashlee Eichler and Sophomore McKenna Tucker got the wins in the circle against Western Heights to secure the first two district wins on the year. Both right-handers were dominant while receiving more than enough run support.

Freshmen Haley Gallo introduced herself to varsity softball as she drilled three homeruns in her first three at bats to highlight the offense in game one.

On Tuesday, freshmen Kinley Duehning pitched a complete game to earn her first win in her varsity debut against Class 6A PC North. She allowed a run in the first inning, but kept the Panthers in check the rest of the way. In total, she allowed five hits, struck out five and allowed only one walk.

The offense piled on four runs in the first inning, while taking advantage of multiple hit by pitch from PC North pitching. The final three runs for the Jays came in the sixth inning to secure the win.

“Great team win tonight,” Blakley said. “Really proud of the girls for overcoming some middle innings adversity. Had several kids step up in the role they were needed for today. With these roles changing every game, it’s really great to see them do what’s needed.”

The schedule will pick up on Friday and Saturday as Guthrie plays in the annual Broken Arrow Tournament. On Friday, Guthrie will play Moore (10 a.m.), Bristow (11:40 a.m.) and Owasso (5:20 p.m.). Saturday’s schedule includes a 10 a.m. contest with Claremore and 1:40 game with an opponent to be named.

“Looking forward to the weekend where we got five tough games and everyone is going to be needed,” Blakley concluded with.

Be the first to comment on "Softball begins season 3-0 with deep, talented roster"