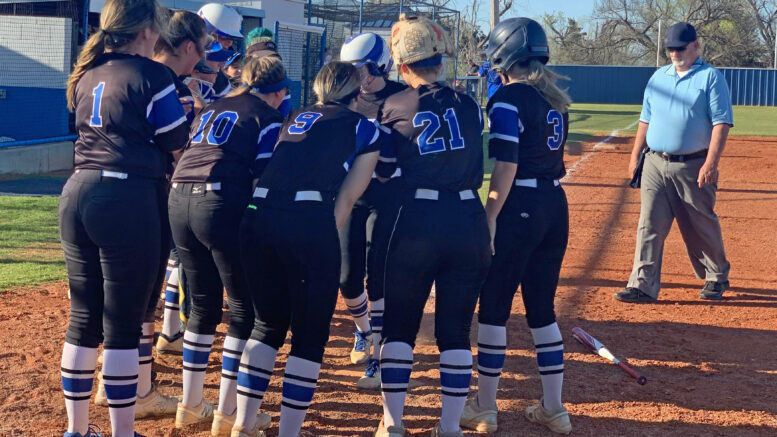 Guthrie awaits to celebrate with Eadie Jobe in the second inning after hitting a homerun against Enid.

After the first win, head coach Booker Blakely said, “Although 30 runs won’t happen much, hopefully the wins and fun does.”

With a sixth inning walk-off grand slam from Addy Awbrey, Guthrie defeated Enid 44-36 in a game that saw winds gusting upwards of 40 mph.

Blakely sum the game up with a comparison to his favorite college football team.

“When the wind helps you feel like both Lincoln Riley and Mike Stoops at the same time,” Blakely said in a humorous social media post.

The Lady Jays erupted for 14 runs (two touchdowns, if you will) in both the fourth and sixth innings.

Jobe lead the team with five hits in five at bats while driving in five runs.

The Eichler sisters combined to drive in 15 runs.

With the win, Guthrie improves to 11-3 on the season.

Up next, the Lady Jays host Putnam City for a double header beginning at 5 p.m.

Guthrie suffered two of their three losses (Chisholm, 13-12, and Crescent 19-13) of the season so far in the tournament, but also collected five wins en route to a third place finish.

There were plenty of individual highlights:

Be the first to comment on "Softball defeats Enid in first ever home game; teams combine for 80 runs"