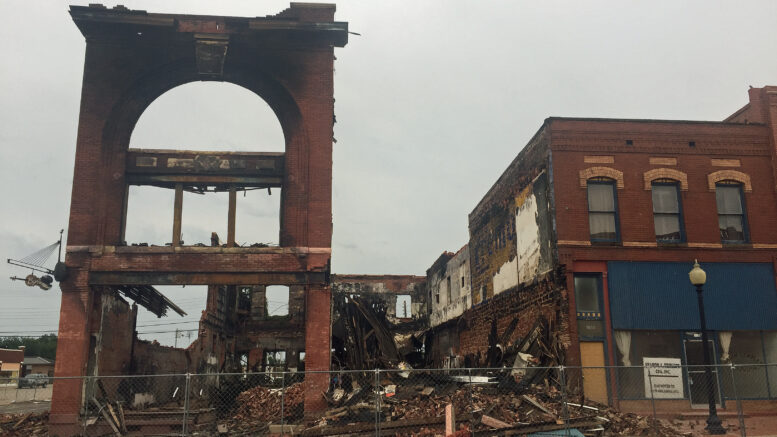 The first tornado warning was issued for northern Logan County before it expired before reaching Guthrie. However, winds reaching nearly 80 mph hit the area.

The second tornado warning was issued for far southwest portion of the county.

Three people, including an infant, took cover in their tornado shelter, but as they prepared to leave the door was obstructed with large tree limbs. Deputies with the Logan County Sheriff’s Office and the Guthrie Fire Department helped removed the limbs and free the family.

When the storms cleared, tree debris was found throughout the city that left many without power.

OG&E reported over 5,000 customers without power.

Guthrie News Page shared the destruction of the buildings moments after the storm passed through.

The front portion of the Furrow Flowers building collapsed along Oklahoma Ave. along with the interior wall next to what was the Double Stop Fiddle Shop.

On the east side of the fiddle shop, bricks came crashing down onto the parking lot leaving half the wall still standing.

Law enforcement officers, along with city and county work crews, worked to clear roadways of the debris. Several roads remained blocked off on Tuesday due to either down or low power lines.

Be the first to comment on "Storm leaves damage throughout Guthrie; downtown buildings further destroyed"