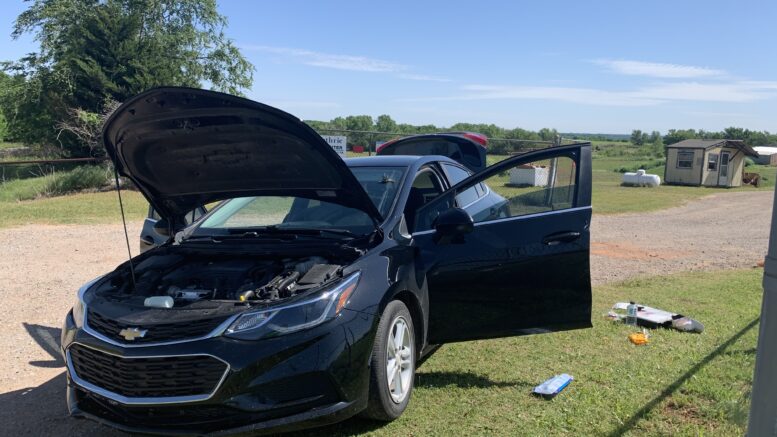 Updated on May 12, 2020 — Christopher Robbin Twitchell was charged with four crimes on Monday after escaping custody over the weekend.

A Kansas man led local law enforcement on a two hour manhunt Saturday morning after he took off running from police custody with his wrists in cuffs.

An employee with the Convenience Center (City of Guthrie’s trash dump site), located at 1506 N. Academy Road, reported a man was sitting inside a black vehicle in front of the business and was unable to wake him.

Police arrived to the scene and found the vehicle parked just outside the center’s gates. A short time later, before 9 a.m., the man — wearing a white hoodie sweatshirt and blue jeans — was taken into custody, handcuffed and placed in the back of a patrol car.

However, the male suspect, whose name was not released at the scene, was able to take off from the back of the unit and into an open field to begin a manhunt.

The Logan County Sheriff’s Office and K9 officers with the Edmond Police Department were called in to assist with the search.

Just after 10:30 a.m., a deputy located the man approximately 300 yards west of College Ave., which is a mile from the subject’s vehicle. The individual was held at gunpoint until fellow officers could arrive. The man was again taken back into custody without any further incident.

Police officials said there was a significant amount of narcotics found inside the vehicle and is possibly why the man took off.