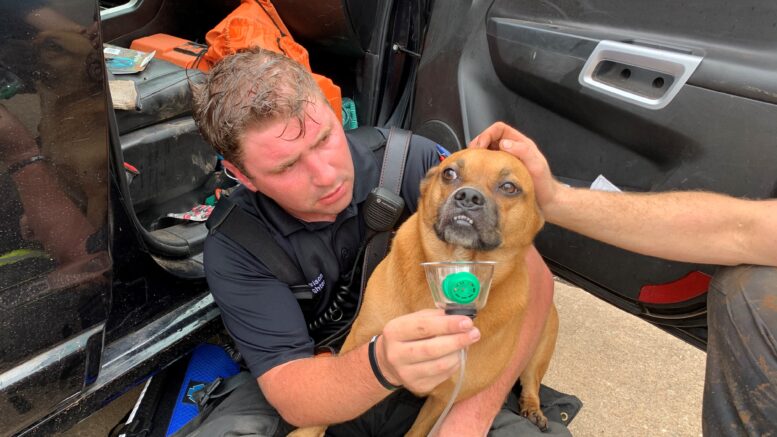 Guthrie firefighter Clayton Davison gives Arthur oxygen after being rescued from a home filled with smoke.

Despite fire, water and smoke damage to a Guthrie home, a homeowner is thankful to be reunited with his pet after he was rescued from the flames and smoke on Monday morning.

A Guthrie police officer noticed smoke in the 400 block of N. Wentz St. just after 8:40 a.m. The Guthrie Fire Department was dispatched and arrived on the scene just minutes later.

Fire crews found the source of the fire in the northwest corner of the home, despite the home being fully-involved with smoke.

Firefighters were forced to use a hydrant a block and a half (Mansur Ave. and Broad St.) away from the structure after the hydrant at Wentz and Warner Ave. did not work. Firefighters were able to access water from their trucks in the meantime.

The fire department, with the assistance of the Crescent Fire Department, was able to knock the flames down and enter the home. Inside they found the owner’s dog, Arthur. Firefighters said Arthur had to have found a secluded location to stay away from the heavy smoke.

The homeowner dashed toward the firefighter, who carried Arthur out of the home. A firefighter was able to treat Arthur with an oxygen mask to help improve his breathing after being in the home for more than 40 minutes.

The cause of the fire remains under investigation.

Wentz St. was shut down for nearly two hours to allow crews to work.

Be the first to comment on "Video: Firefighters rescue dog from house fire"