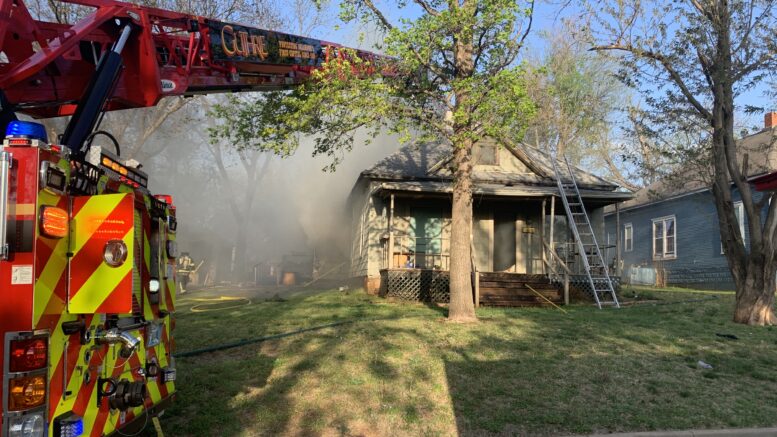 As soon as the Guthrie Fire Department got a decent handle on a house fire, another house caught fire just down the street.

Just before 6 p.m. fire crews responded to the 800 block of N. Broad for a structure fire. When crews arrived, heavy smoke and flames could be seen near the back of the property.

An outdoor shed was consumed with flames as it traveled to a nearby patio and eventually into the home. Inside were two children and a dog. All three were able to escape to the opposite side of the street.

Five firefighters from Guthrie responded before Coyle and Sooner fire departments could arrive with additional resources and manpower.

While the cause was unknown at the scene, the fire is believed to have started in the outdoor structure.

The home is a complete loss with the roof caving eventually caving in. However, some belongings were able to be salvageable, but not much.

At 7:25 p.m. and crews still working to extinguish all the flames, a witness saw flames and smoke coming from the roof of a house just down the street in the 900 block of N. Broad.

Sooner firefighters moved their engine from the first house to the second house, and allowed firefighters to go inside, extinguished the flames and kept the fire in the same location.

The fire to the second home is believed to have been caused by the fire up the road with an ember making its way to the roof of the home.

The fire department continues to investigate.

Be the first to comment on "Video: Guthrie firefighters battle two nearby house fires"