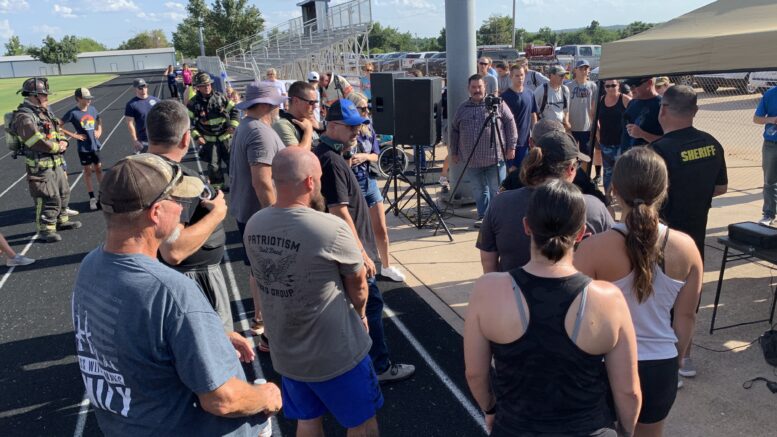 Despite triple-digit temperatures, police officers grabbed their body armor, firefighters put on their bunker gear and friends and families came together to honor the life of Edmond police Sgt. C.J. Nelson.

The crowd, which also included Edmond police officers, gathered at the Guthrie High School track to show their support. It was the idea of Guthrie Police Lt. Mark Bruning with the Guthrie Police Department. Bruning made a call to Sheriff Damon Devereaux and the Memorial Mile was created.

With music playing, participants made their way around the track four times. Some ran, some walked but all came to celebrate Nelson’s legacy. Just hours after his funeral was held in Oklahoma City.

As a member of the Edmond SWAT Team, Nelson’s final callout came in Guthrie for a barricaded suspect. In front of the home was the SWAT team’s BearCat, the same BearCat that escorted Nelson through the funeral procession.

Nelson is the first Edmond police officer to lose his life in the line of duty.

It all happened when the 38-year-old officer was involved in a five-vehicle crash last week when he was sitting at a red light when a white truck allegedly failed to stop at the light and crashed into Nelson and three other vehicles on Broadway Ext. in Edmond.

You can see the run on the Guthrie News Page Facebook page.