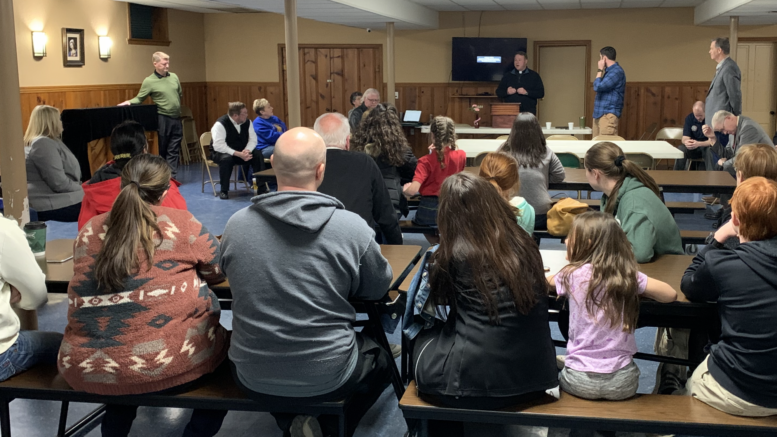 Inside the St. Mary Catholic Church cafeteria Thursday evening, parents and members of the parish pleaded for more time to help save their school. Meanwhile, the pastor of the church and the Archdiocese of Oklahoma City says they have simply run out of time.

On Tuesday, Father James Wickersham released a letter announcing the school would reduce the number of grades offered for the next school year due to financial concerns. Related article: St. Mary Catholic School to reduce number of grades

Beginning with next school year, the school plans to drop kindergarten through eighth-grade classes and offer three and four-year-old pre-kindergarten classes.

Enrollment numbers have been on the decrease over the last five years, including 37.2 percent this year from a year ago. A total of 76 students are enrolled in the school’s kindergarten through eighth grade classes compared to 121 last year and 140 in 2016-17.

“It has been fallen like a rock,” the pastor said of the enrollment.

Wickersham says the school’s budget, which is funded through tuition and the church’s parish, in the last five years has been “difficult to control.”

The pastor says the school is expected to be out of $105,000 by the end of the school year.

Wickersham says school expenses have exceeded the income and that funds have dried up in donations, parish savings, school savings and debt.

The pastor says the Archdiocese “graciously” forgave $288,000 of school debt for operations, but is in danger of once again owing the Archdiocese an estimated $70,000, according to Wickersham.

“They (Archdiocese) asked us to take that breathing room to make it through this year as best as we could, but now we are up against another year of deficits.,” Wickersham said and added beginning this month he has ceased paying teachers’ health insurance.

“The school is too big for the parish to be able to healthy support,” Wickersham said. “As one finance council member once said, ‘the school has become too successful for our parish.’”

He continued, “This is truly my nightmare scenario that I’ve tried for five years to avoid and never thought I would be here telling you all.”

Parents shared their displeasure throughout the meeting about not knowing the seriousness of the school shutting down without their knowledge.

“We should have an open forum before we make a decision to say this is bad and we need ideas before we have to close the doors,” parent and parish member Doug Russell said.

“We have six months and pool people together and say these are the parameters that we need. We don’t send out press releases or emails. There’s no fight left.”

Another parish member said, “You (Wickersham) said you were all out of options, you weren’t. You never gave this option to the parish.”

A parent of the Parent Teacher Organization (PTO) said she wants an opportunity for others to help the school.

“You (Wickersham) made this decision for everybody and you have not given your parents, your teachers, your students, your parishioners the opportunity to help you fix this problem. There’s money out there. We just need the opportunity to ask for it. Let your people help you.”

The group requested more time to help save the school. Soon after, Wickersham concluded the nearly two-hour meeting and held a private meeting with the seven members of the Financial Council.