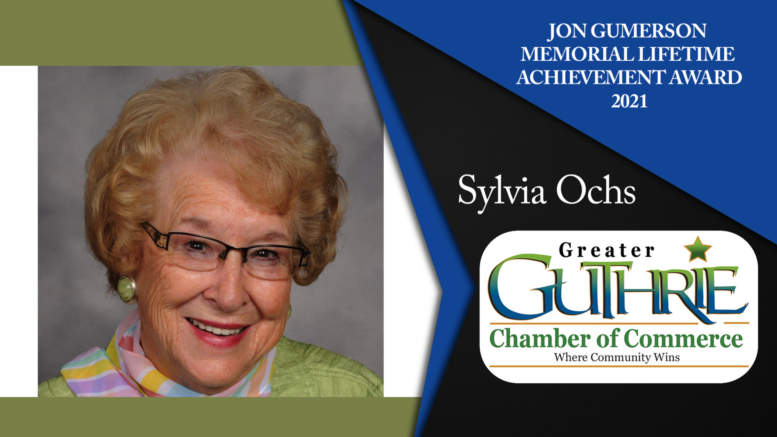 The Greater Guthrie Chamber of Commerce held their annual banquet last week and announced this year’s winners for a variety of honors.

The Lifetime Achievement Award, which is named after Jon Gumerson, was presented to Sylvia Ochs. A model of a volunteer, Sylvia was the first woman to be president of the Guthrie Lions Club.

Along with several accolades as a realtor, Sylvia has served on just about every board possible in Guthrie and Logan County.

“For those who know me, you know its rare that I’m speechless,” Sylvia said as she addressed the banquet audience.

“I’ve met so many people. I’m so proud to be a Guthrie person. This is a wonderful place to live.”

Sylvia spent majority of her speech on her family and took pride that they “all live here” in Guthrie.

Tami Boxley was named the Volunteer of the Year.

Adam Ropp, who presented the award to Tami, said not only did she volunteer for committees, churches and food drives, but want impressed him and many others was that Tami volunteered for individuals.

Adam added a lot of the volunteer work came in “secret.”

“It’s an honor to receive volunteer of the year award, especially with so many great nominees,” Boxley said in a video. “I love our town and want to thank everyone who volunteered this past year.”

She added, “It’s important to me to give back to my community, and I promise to continue to do wherever I’m needed.”

Kristal Flury never saw the moment coming when Billy Clark presented her with the Citizen of the Year award.

With both hands covering her face in disbelief, Kristal was speechless as she was given her plaque.

“I’m going to be honest. I don’t have any words. I’m speechless.”

Kristal said she loved her community and “everything” she does in the community.

Billy says Kristal is a champion for Environmental Management, Inc. (EMI), and is loyal to both the Logan County United Way and Rotary Club as she serves as the president for both, including the last four years for United Way.

Melanie Ball, a teacher at Cotteral Elementary, was recognized as the Teacher of the Year by Guthrie Public Schools.

“Education is the family business,” Superintendent Dr. Mike Simpson of the Ball family.

Melanie thanked the chamber investors in showering her with gifts for coming away with the annual award.

“It makes you feel special and appreciated.”

After being here for 21 years, this community is the best place ever to live and raise a family.

Melanie is one of 12 finalists for Oklahoma Teacher of the Year, which will be announced next month.

This non-profit provides a “beacon of hope and help for men, women, children, for singles, for married, for families, for blacks, whites, browns, for young and for old,” Mayor Steve Gentling said of the Hope House in Guthrie.

With no paid staff, the Hope House is a non-profit facility that provides a sober living environment that are homeless and/or in addiction recovery.

One wing of the facility is reserved for those that are only seeking shelter due to inclement weather, a temporary financial situation or other similar crisis.

“There are so many non-profits that make up our community, our county and whose total missions state is service,” Gentling added.

The Mayor added, “The Hope House is constantly striving to make a difference in our community and the lives for those that it serves.”

In the year when the world learn about COVID, many small businesses were unable to survive. However, Guthrie Haunts was able to overcome.

Guthrie Haunts celebrated its tenth year of business of frightening, um entertaining, both the young and old with their creative haunted houses.

“What a crazy year,” owner John Pagonis said. “In March, I was in trouble, but I knew you (the community) had my back and that has been really special.”

Pagonis added they have bigger and better things coming this year.

Prairie Wolf Spirits, an Oklahoma-based craft spirit maker located in downtown Guthrie, could have earned Business of the Year on its own business model, but their efforts to give back helped solidify their honor for 2021.

What started off with a few hundred small bottles of hand sanitizer turned into thousands and thousands of gallons across the nation.

“Unfortunately a pandemic did hit our country, but what we saw was an opportunity to be of service first and foremost,” Jonathan Stranger said after accepting the award.

“We knew we had to give to Oklahoma,” Jonathan added.

Indeed they did with over 27,000 gallons away to first responders, schools and other state entities to try and help the pandemic.

“Are we great businessmen? I don’t know. Maybe because its we know what we don’t know.”